UnNews:Cheney indicted for 67 counts of grand larceny to the jolliest extent 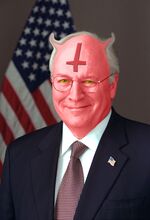 File photo of the indicted Cheney.

WASHINGTON D.C. - Secret files were found last night in the boxes of papers that Vice President Dick Cheney has deemed as not important enough to get into the National Archives, which link the Vice President to 67 failed attempts at stealing Christmas.

The papers prove that Cheney has attempted to steal Christmas every year since the year of his birth. These cases have been deemed "grand larceny of the jolliest extent," and Cheney faces indictment on 67 counts of it. All operations set up by Cheney for the attempt at stealing the 2008 Christmas have been foiled, and all of Cheney's Vice Presidential powers have been suspended indefinitely, until these charges are faced.

Some may remember the Christmas of 1981, the closest that Cheney ever got to stealing Christmas. It included a giant ray gun, powered by the souls of 1,000 orphans with polio, and a pinch of baby panda bear blood, which Cheney attempted to use to shoot Santa out of the sky, and harness his magical powers to enslave humanity. Dasher and Vixen received second degree burns, and Santa got a chunk of his ear shot off, but was still able to finish his route. Some lucky people got an extra gift that year, an ounce of Santa's blood.

Cheney has remained very diligent in his attempts at stealing Christmas. Over the years his ideas have gotten much more intricate, some so much that he didn't have time to finish them in one year. Despite not actually attempting to steal Christmas in 1965, 1974, 1989, 1992, 1994, and 2001, he is still being indicted on "Conspiracy to commit grand larceny of the Jolliest extent".

Cheney's case will be heard by the United States Supreme Court on January 3rd, until then he will remain in office, with all his powers stripped away. Following the Supreme Court hearing, Cheney will be flown to England to have the same trial by the European Union, and finally after that he will be flown to the Middle East, to have bestowed upon him the highest honor in the Islamic religion.