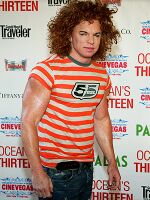 Scott "Carrot Top" Thompson arrives at a screening for Ocean's 13 in an archived image. Thompson was living the dream off his lifetime as the first mate aboard the refurbished SS Minnow

VANCOUVER, BRITISH COLUMBIA (UP) Over the weekend a small tourist vessel carrying famed comedian Carrot Top did not return to Vancouver Island after what was only supposed to be a three hour tour. The S.S. Minnow, which is the same boat that's seen in the opening sequence of the 1960's sitcom "Gilligan's Island" never returned to port Saturday afternoon and is listed as missing with five passengers and two crew members. A vast, multinational effort featuring hundreds of planes and vessels has failed to find any clues as to the fate of the Minnow as of Monday morning but searchers are still hopeful. "There's a lot of ocean out there" said Lt. John Titchen, a US Coast Guard spokesman.

"The S.S. Minnow left the marina at Nanaimo shortly after 9:00AM Pacific Standard Time on Saturday and was due back at roughly noon according to information received by the local harbormaster. The Coast Guard did not receive a float plan from the Minnow prior to departure. We know that the weather started getting rough around 10:30AM and it's more than likely that the tiny ship would have been tossed in these conditions" said Coast Guard auxiliary spokesman Drew McKee.

The vessel had been purchased by Ken Schley and John Briuolo of Nanaimo, British Columbia a few years ago for $89,000. The men had restored the 36-foot mahogany vessel and recently began running tours from Vancouver Island. In a case of life imitating art the restored Minnow's skipper never filed a Float Plan, failed to check the weather forecast and did not carry an Emergency Position Indicating Radio Beacon or EPIRB thereby hampering search and rescue efforts which makes the possibility of locating them on an uncharted, deserted island almost impossible.

Life imitates art? The SS Minnow is seen in this archived photo after running aground on a lonely, desert island

Scott "Carrot Top" Thompson is an American comedian known for his bright red hair, prop comedy and self-deprecating humor. lately, he has been also known for his bodybuilder physique. Thompson was a huge fan of the old sitcom featuring Bob Denver and Alan Hale Jr, which is what brought him to Vancouver Island for what he viewed as "the chance of a lifetime" to be the first mate on the S.S. Minnow.