UnNews:Canada pulls a fast one with a snap election

The Prime Minister throws the first pitch at the Toronto Maple Leafs opening play-off game, even though Toronto doesn't even have a major-league baseball team and even though the real leader of Canada is the Queen of England.

OOKPIK, Especially Cold Territories -- The 2011 Canadian general election is shaping up to be the most interesting election in the nation's 136-year-long history as a British colony. Having more than two political parties running at one time, working with no President at all, and debating in two languages has confused and impressed people all over the world with how fascinating non-American politics can really be. The compelling conclusion is that the entire election is being faked.

The cover story that the nation's state-supported channel (and apparently a channel people actually watch) insists that Stephen Harper (lovingly or perhaps scathingly known as Stephane Harpeur by some) received a non vote of no confidence, political trickery too complex and difficult to understand. It either means congress wants a new election at the drop of a hat or that lawmakers want an easy six-week vacation. Imagine being able to call a Presidential election any time you desire. It is a fantasy that would instantly blow a load in any Tea Party followers trousers. Sadly, it is all fake. There was already an election in Canada a year ago, and a year before that, and apparently the year earlier. It is a nation more in love with elections than the United States. There are limits though, even in Italy. What country could possibly have eight elections in five years? 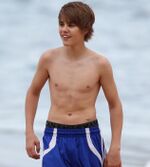 Canadian hunk Justin Bieber claims he will vote for the Quebec separatist party, even though he is from Ontario, is too young to vote, cannot count to 5 in French. Besides, his manager makes his decisions.

This reporter went to Montréal, the birthplace of high cuisine (such as throwing french fries cheese, and gravy together or stacking fermented meat on bread) and the Mecca of Vietnam-era draft-dodgers from America. He attended a debate between the leaders of Canada's thirteen national parties and a regional one most people seem to despise despite their neat logo. They argued with each other in a language they claim is French but which causes physical pain to other French speakers from Paris to Haiti. Controversy erupted when the leader of Canada's Green Party was not allowed to attend the debate as she forgot to bring doughnuts for the other participants.

This reporter's boarding-school Latin was sufficient, however, to understand that the leaders were really arguing about the date of the "election," the initial proposal conflicting with the hockey championship that fills the next two months, and guaranteeing that Canadians would simply forget to vote.

The Prime Minister hopes to get a majority of the seats in the House this time around, as he only got a few dozen after last month's election. This sealed the joke, as it's clear you can't govern in a Kangaroo parliament. No system would be set up to allow governments without enough seats to govern nor checks and balances (such as a President to veto everything or a Supreme Court to rule against everything). 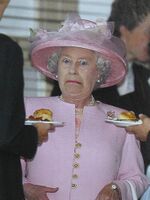 Canada's leader Queen Elizabeth choosing the second desert for her grandsons wedding reception in London. She's not even in Ottawa.

Supposedly the Queen of England signs these bills from time to time. However her only presence in Ottawa is a handful of statues. Good one Canada. You won't pull a fast one on us like that again any time soon.

Being unable to get to the bottom of the "election" myth, this reporter dutifully went to Ottawa on the expense account where locals there are far politer and slightly duller in a brisk -14ºC/7ºF which is said to be unusually warm for Spring. However, the house of representatives was vacant. Maybe there was an election after all. The only politician in town was the Queen of England--again, in the form of bronze statues, riding a horse and wearing big hats. The actual "political debate" was confined to dozens of doughnut shops, but the only themes were coalitions, public health care and bilingualism. As public health care and coalitions are socialist fairy-tales it was as though people were trying to invent issues to make the election seem credible. The arguments where in French at one table and English at others with a wide distance between them. Where was this magical bilingualism they talked of? A nice slight of hand for sure.

No sale. The Ottawa visit only convinces this reporter that there is really no election, just a practical gag that bored Canadians are playing on the world. Nice try. Call us when the real election happens next year.