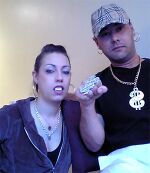 LONDON, England -- British royal Princess Beatrice, daughter of whining ginger harridan Sarah Ferguson and grand-daughter of The Queen, will long regret the impromptu shopping trip she made last Wednesday. First of all, her car was stolen. Secondly, she was arrested as a result.

The princess, aged 20, was driving the black BMW through London, accompanied by her bodyguards, when she noticed a new clothing shop had opened in Devonshire Place, one of the capital's most expensive areas. Like many young women of her age, Beatrice has an addiction to new clothes and couldn't help herself so she parked the car and embarked on a shopping spree. However, she was so excited she left the keys in the ignition and didn't lock the doors. Onlookers said it took less than five seconds for the car to be stolen, which is actually quite a long time for an unlocked BMW in London.

Emerging from the shop a short while later, Beatrice was devastated to find her beloved car gone and immediately phoned the police to report the crime. However, she was in for a shock when, after asking a few questions, the officer arrested her and charged her with possession of a controlled substance with intent to supply another person under the UK's Misuse of Drugs Act. Once read her rights, she was taken to Kensington Police Station where she was searched by a female officer and later questioned.

Police Constable Colin Allcars later informed UnNews: "I attended the scene of a crime after a call from a member of the public reporting that a black automobile had been unlawfully removed without the owner's consent. When I reached the location, I spoke with the owner of the vehicle who was also the person responsible for reporting the crime. I took her details, but became suspicious when I asked what her occupation was as she informed me that she was not in full-time employment. Noticing that she had made a large number of purchases from a nearby shop - many of which appeared to be highly-expensive items of clothing - I became suspicious as to how a young woman without employment would be able to afford such items along with a £17,000 car. I was also alerted by the presence of several large men who appeared to be acting as her bodyguards. This made me dubious about the source of her evidently considerable income, and so as a precautionary measure I arrested her due to my suspicion that she might be involved in the supply of illegal drugs."