UnNews:Bristol Palin drops another one 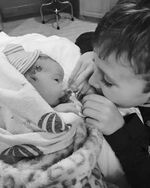 Sailor Jupiter Palin is welcomed into the world by 7-year-old brother Naruto.

WASILLA, Alaska -- Bristol Palin, daughter of conservative heart-throb Sarah Palin, has gone from being an Abstinence Spokesperson to an unwed mother, again.

Ex-fiancé Dakota Meyer, who broke off the engagement at what would have been the pregnancy's awkward third month, blogged that he "couldn't be more proud," though perhaps not so much so as to pay child support. However, Democratic Party chairwoman Debbie Wasserman Schultz hastily called a press conference to state, "That means she's a hypocrite!!!"

Palin had blogged in June that the pregnancy had been planned — it was merely the break-up that was spontaneous — though she had blogged earlier that the pregnancy would mortify her family. She clarified that she did not mean they would be embarrassed by her getting knocked up for a second time, but instead by an even earlier post where she chastised the "giddy a$$holes" who disparaged her commitment to the Abstinence movement. She said she should not have censored that post but should have "spoken plainly, like Mom." It is not known whether Ms. Schultz is giddy.

For years, the Palin family has whipped conservatives into a frenzy, while carefully avoiding saying about what. Thus, mainstream media outlets such as this one have had to portray them all as low-lifes, shining unfair light on every bar brawl and case of drunk driving and domestic assault. The publicity has waned since mother Sarah's career on Fox News crashed and burned and she passed the baton to equally vague but inspiring Jeb Bush.

Bristol has taken pains to dispel her association with the Alaska back woods, naming the new love child Sailor Jupiter, a name from literature. "Yeah, I read. Lots," she said. She gave herself extra credit for never contemplating abortion.

The National Campaign to Prevent Teen, Unplanned and/or Republican Pregnancy insists it never employed Bristol as a spokesperson, and surely that is why director Amy Kramer gave her unsolicited advice. "You said you didn’t want nagging," she blogged, "so think of this as something other than nagging: Get on the fricking pill before you crank out any more future right-wingers who will zero out our funding."