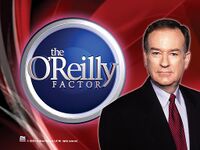 The logo of O'Reilly's cable show.

NEW YORK, New York -- Amid worldwide calls of praise and acclaim for William Autrey, the "subway Superman" who saved the life of a college student (Cameron Hollopeter) experiencing a seizure between the rails of a New York subway line, conservative commentator Bill O'Reilly yesterday delivered a lone dissenting voice on his Fox News program The O'Reilly Factor. Specifically, he criticized Autrey based on the assumption that Autrey's action required "unnatural" physical contact, albeit its being clothed, relatively temporary, and, in O'Reilly's words, "supposedly nonsexual."

"While many of us are initially inclined to deem this man a hero — and believe me, I don't count myself as immune from this temptation — consider the aspects we can only infer from the testimony of witnesses and Mr. Autrey himself combined with the fact that New York subway cars allow for no more than two feet of space underneath. Clearly, there is only one conclusion: that Mr. Autrey is thoroughly guilty of "dry humping" Mr. Hollopeter."

"Whether or not he saved a life in doing so is irrelevant," added O'Reilly, "since God would have known precisely where to put Hollopeter's soul anyway. As for the supposed 'hero' in this case? Well, there's always more room in Hell."

Understanding the controversial potential of his initial claim, O'Reilly tried to support it by pointing out alternative actions Mr. Autrey could have taken in the split-seconds he had to make a decision. "While positioned over Hollopeter's body, he didn't have to flatten out his own, but could rather have held himself up on his arms and knees, leaving a gap. There's still some chance, after all, that both could have pulled through without losing more than an epileptically shaking limb or two. The fact that both he and Hollopeter emerged with only minor injuries, however, tells a different story. A very different story indeed."

"Even before leaping in, he might have considered a route less reminiscent of an abomination." Quoting Leviticus 20:13, he said, "'If a man lies with a man as one lies with a woman, both of them have done what is detestable.' Therefore, a simple way out would have been to request, coerce or simply push a female bystander into the life-saving position. While this would have resulted in partial fornication instead, such would have been a much more preferable, and indeed, redeemable sin."

This is not the first time O'Reilly has entangled himself with controversial statement, such as one calling for the assassination of Hugo Chavez and another accusing activist Cindy Sheehan of being a "political player," but yesterday marked the first time he went against the line of nearly every American politician, including members of all political parties. (O'Reilly himself is currently an independent.)

"Autrey is right about one thing," concluded the pundit, "He isn't a hero. No faggot is."