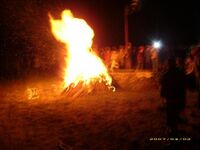 The spirit of Pope John Paul II or an exploding aerosol can? Only you can decide.

MADOWICE, Poland -- Pope John Paul II may be dead, but when you've lived as good a life as he did death can't stop you from performing the occasional miracle if the mood so takes you. Catholics worldwide (and there's a hell of a lot of 'em, John Paul himself saw to that by refusing to change Vatican doctrine on use of birth control methods) are claiming that his ex-eminence has done just that by appearing as a figure made of flames in a bonfire during a ceremony commemorating his death held close to his birthplace Wadowice in Poland.

Pictures of the phenomenon - taken at the same time and day as the Pope died two years ago - are being shown continuously on Italian TV, where even soap operas have been postponed to provide more airtime to be devoted to the miracle. Polish religious website Korazym.org, also showing the image, has received so many hits it has crashed several times - East European servers, it seems, also need a miracle.

Vatican News Service director Father Jarek Cielecki told UnNews reporters that the event was witnessed by many hundreds of people who had gathered at the ceremony to honour John Paul's death and to consume the moonshine vodka that has made the area famous, claimed (by local Protestants) to have hallucinogenic properties.