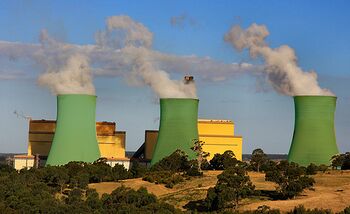 Australia has become a world leader in producing "green" power.

CANBERRA, Australia -- Australian ambitions to cut greenhouse gas emissions have been given a major boost with plans announced to give the country’s coal-fired power plants a fresh coat of green paint.

The Federal Government has self imposed a strict target to cut its carbon emissions, reducing them 2% by the year 2043, and believes this is an important first step along the way to reaching its goal.

Prime Minister Julia Gillard bellowed in a media conference, "We feel it’s better to act on climate change now, rather than later, and the greenuationalizing of our dirty rotten, coal-fired power plants is an important step in the right direction." Her comments were met with a solid round of back slapping and somewhat inappropriate cat calls.

Federal climate change advisor, Ross Garnaut, has lauded the latest initiative. "Everyone knows that green is by far the most environmentally friendly colour; just like red is always the fastest colour, and yellowy greenish-brown represents the aftermath of too much Indian food."

Not everyone was happy with the proposals put in place, with Greenpeace planning protests against the plans complaining that,"We feel that the funding could be more appropriately spent on painting renewable energy sources such as hydroelectricity dams or the sun. Besides, we own the rights to being green, and any profits to be obtained from its use." Protesters had originally planned a "sit-in" at the heavily polluting Hazelwood Power Station in Victoria, however, the inside of the cooling towers were inaccessible and were deemed an unsafe working environment by the International Protest Committee.

Head of the Climate Change Septic Think Tank, Borald Hemsworth, has defecated on the action, stating, "These politicians are full of verbal diarrhoea, we must not allow ourselves to be bogged down in this environmental, climate change bullshit. And another thing, the colour proposed is more of a pale jade, which will have no impact on global emissions whatsoever."

The Australian Government plans to further reduce the country's contribution to the global greenhouse effect by introducing a new "Carbon Admission Scheme", whereby anything not painted the enforced shade of green will be subject to a 50% "environmental rape prohibition" tax.