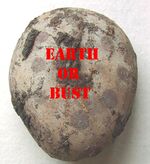 EARTH, Solar System -- Puny humans were dismayed today to discover that the asteroid "Apophis" has a significant chance of hitting Earth in 2038, plunging the world into a hellish combination of nuclear winter and extreme global warming. Experts conservatively estimate the cost of saving the world to be around $300m, a sum which could be easily afforded by many large multinational corporations but nobody wants to pay for it. We're all going to die in an instant of incandescent agony as an explosion with the force of 80,000 Hiroshima bombs shatters our brittle bones and shreds our fragile meaty bodies.

Asteroids are chunks of rock which defy the laws of man, nature and common sense by staying way up in space and float,not falling like rocks should. Current scientific theories insist that they are hanging quite literally miles above our heads. However, every now and then one of them will suddenly plummet like the vengeful fist of God and blot all life from the world. NASA has repeatedly insisted that the space shuttle poking around up there is not the cause of all this, but then they would say that, wouldn't they.

Currently plans for deflecting the asteroid include using a tractor beam, giant lasers, or a solar sail to change its orbit. Unfortunately the people who came up with these ideas have been watching way too much science fiction, and none of these devices actually exist in any useful form.

Fans of "Stargate SG1" the science fiction TV show were amused, remembering how in the show Apophis was an alien overlord bent on destroying the Earth. Lets hope these nerds appreciate the irony when that smirk is wiped off their face by 10,000mph winds while storms of burning ash and radioactive dust flay the flesh from their bones.