UnNews:Artists ordered to reveal bottoms when applying for grants 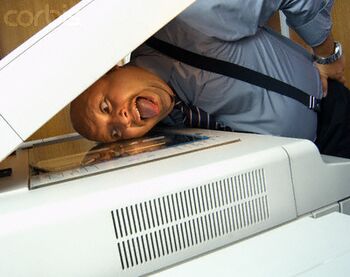 ARTISTS WHO SEEK EXTRA FUNDING for their artistic output are now required to submit a photocopy of their arses within the Arts Council's latest grants application form. Individuals and arts bodies applying for money are requested to supply "a recent image of your bare posterior". Bemused applicants are explicitly asked NOT to supply a standard photograph but to "provide the image using photocopier or scanner equipment. Any photographs will be rejected and the applicant requested to resubmit the application for funds".

Arts Council England insisted last night that the received images would never be used "to put up in the office with a marks out of ten pencilled on each one". A spokesman also denied reports that the images would be posted on the website www.photcopied-arses.com which pays out £1.50 per arse image uploaded, "yes, with hundreds of photocopied and scanned arses coming in every week it would be a bit of a money spinner for us but we have no current intention to upload images to this, hilarious website".

The controversial requirement - coincidentally question number 2 of the Grants for the Arts form - has caused consternation among the art community. Gandalf, who lost his arse whilst filming the last Harry Potter movie, said: "It sounds extraordinary, It shouldn't be on a form. It's quite inappropriate."

Council spokes-gay said that the monitoring of artists' bums is a useful way to ensure the grant process is "open to the broadest range of people as possible". But the form has received a hostile reaction from the arts world. Gary Buggerman, who painted a flower on his penis, said: "I'm speechless, I charge at least £12,000 for images of my fine posterior. I certainly will NOT be providing these images free of charge. I have sixty mouths to feed!".

The moves comes a year after the application asked for female artists to provide scanned or photcopied images of their big tits so as to "fast track the application process".