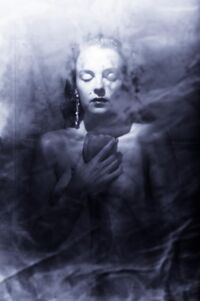 Prudence Waterton-Boyle is beginning to feel unwelcome in her own haunt.

BRISTOL, Connecticut - Local apparition Prudence Waterton-Boyle has been haunting the old Boyle house since she was brutally cut in two with a chainsaw by her incensed husband, Prescott Boyle, over fifty years ago. But lately, the home's current occupant, a single professional woman named Janee Knightly, has been showing signs that she may be tiring of the haunting.

"It isn't anything overt or rude," explained Boyle via seance with local medium Agnes Doolittle. "It's little things. She's leaving certain books open to certain pages, you know? The other day, it was right there; Exorcism For Dummies. You know? I'm not stupid. Oh, and clearly, just to spite me, last night she rented Ghostbusters. I mean, what is that? Hello, I'm right here."

Knightly, for her part, described her biggest pet peeve about the shared living space. "Well," Knightly said when asked if she is trying to force Boyle out. "I'm just trying to live my life, here. I don't know the spirit-realm legal details regarding forcing her out, but what I really can't stand is that [expletive] constantly moving my toothbrush." She refused to comment further.

Local parish priest Father Robert Noddingham acknowledged that Knightly approached him with the request to come over and perform a rite of blessing at her house. "The rite of blessing a house is not uncommon for many faithful wanting their homes to be filled with the warmth and presence of the Holy Spirit. Unfortunately it has also been associated with exorcisms, so it is not necessarily clear that Ms. Knightly's motives are not at least partially directed against the poor Boyle woman."

Boyle does not plan on leaving. "This has been my haunt since the day I was cursed to remain on this earth for all of my days, and I refuse to leave it. It was here I watched as the demons carried the dark spirit of my late husband down to the fires of hell, and it is here that I will remain. Miss Knightly can move if she doesn't like it."