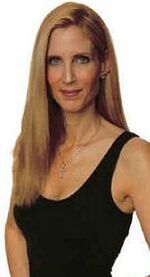 In the middle of a rant about Donald Trump, conservative pundit Ann Coulter looked directly at the camera to yell “LOOK AT ME!!!!” and added that it was necessary that she be the center of attention at all times.

“I have this show for one reason,” Coulter told FOX News viewers. “You need to pay attention to me right now. All of you. Every single one of you. If you don't pay attention to me, illegal Muslim trannies will rape your children in the bathroom, turning them into gay communists.”

Coulter went on to claim how the president could use his powers to make the American people look at her without consent. “I think [Trump is] finally going to pull that secret NSA program out and say, ‘From now on everyone's television screens will be on 24/7, Ann Coulter will talk endlessly, and everyone in the world will have to pay attention to her as they are observed from the other side of the screen.’” When asked whether this might raise constitutional issues, Coulter said it would be “terrific” to have everyone talking about her in the context of something as important as the Constitution.