UnNews:Analyst: War on Fish will end in 50 years 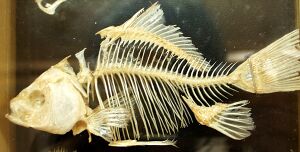 The preserved skeleton of one of these dangerous "sea terrorists".

SOMEWHERE, in the Ocean (Unnews) -- After centuries of warfare Analysts predict that the global War on Fish and other marine life will end by 2048. "Our genocide against the trillions of fish in the sea is starting to take effect. We should finally wipe out the marine life threat to the human race": this according to one particular Analyst This would bring an end to marine terrorism like the String Ray attacks late this year, including the tragic death of Steve Irwin and the mass murder of wasps

Analysts gives most of the credit to the economy,which seem to somehow take advantage of Marine terrorism effort and has increased demand so much that accelerated the effort against marine life. "We also believe that people have finally became aware of the marine life threat from the death of Steve Irwin two months ago," Analyst also notes the report.

President Bush also commented on the news "Soon our children will be able to ask the question 'how many fish is there in the sea' and finally receive the answer zero," said Bush at a White House news conference. Bush also said that he will work with Congress to help the economy benefit form this and accelerate the effort in the War. Despite this news, Bush's approval rating seems to be unaffected, possibly due to his meager progress in the war against squirrels.

"We could some day live in world without having to fear marine life soon" says the analyst "But in order to finish it off it's going to require an effort in the government to ignore those crazy people who think marine life is good and pass legislation to accelerated the effort."