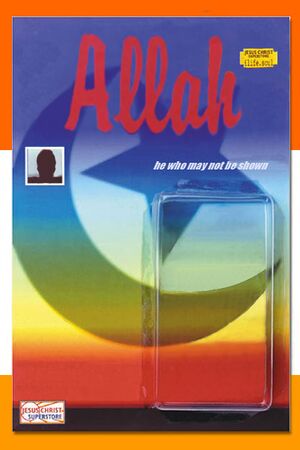 THIS CHRISTMAS SEASON - Toy stores will be stocking some new and innovative wares. Among the entries of this years toy lineup is the Allah "He who may not be shown" action figure.

Mattel Toys spokesperson Alana Gesundheit told UnNews, "With a significant upsurge in the Middle Eastern population here in the United States, the board felt that now is the time to release a product that will fill a void in the hearts of young Muslims during the traditional Western Holiday season."

"We're introducing Allah "He who may not be shown" this week so that the little terrorists in the making don't feel left out. Kids can be cruel to one another, and I can imagine some righteous, well-meaning Christian kid, wanting to share his Christmas present with his little Muslim friend, and the poor little tyke thinking, "Why can't I get a special present for Christmas, like the other kids in school?" I think of Mattel as making a brighter, happier life for kids of all shapes and colors."

The price of Mattel stock is surging as manufacturing cost estimates become available. Costs are reduced by outsourcing production to prisoners of Guantanamo Bay. Thus the camp can't be closed before Christmas. Hallelujah!