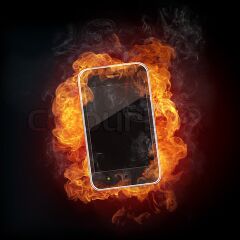 OGMORE-BY-SEA, Wales -- Amid increasing public outcry and rising court costs, Amazon have stopped selling its hottest gadget, the Fire Smartphone. According to its website, the 32GB and 64GB models are "currently being terminated" over public safety concerns.

Hitting the asbestos this week, with a launch party that was part olympic torch ceremony and part airport crash drill, the Fire Phone was Amazon's first foray into the smartphone market. One of the first UK owners of the smartphone, Gareth Bevan, said dealing with the flammable device was problematic from the outset. Having camped for days outside the Ogmore-by-Sea's mobile phone shop, Bevan was shocked the see black smoke pouring from the building when they eventually opened the doors. Mr. Bevan said: "Inside, the acrid smoke got so low, we had to run through the flaming terms and conditions under the desk. Her demo in silver gloves was the most terrifying five minutes of our lives. I knew I should've walked away at the "... and we do free (cough), three-month, accidental (cough) damage insurance, after a one off payment of £160,000 (snort, splutter, forced-cough)."

Amazon had already suffered a $170m writedown "primarily related" to fires during transportation, especially the Channel Tunnel. And last month, the Wall Street Journal reported it had lost "dozens" of Fire Phone engineers, through fatal burns, asphyxiation and resignation - annoyed by the constant need to graft skin from their bottoms to their hands.

Within hours of its premiere in Ogmore-by-Sea, "R Phones R Fine" was ravaged, as well as Pizza Express and the Post Office. The fire service also attended the housing estate, where at least five properties were ablaze. Outside the smouldering remains of one bungalow, the town's Fire Chief said that poor Mr Evans' property burnt down because he received a text message about a half-price cinema ticket offer.

"Beep beep beep, whoof, up went the kitchen curtains." said the weary Chief. "As this young man tried to dial 999, the heat shock meant he threw the phone into the living room, setting fire to his wife and children too."

A soot-covered Mr. Evans added: "Talk about the cure being the symptom, I would have been better off trying to call for help using a Molotov cocktail. And the biggest irony is, it turns out the cinema deal is only available with the Family Bundle. What a terrible waste. Apparently "considering my tragic loss", the cinema have offered me a free, regular Flamin'-Hot Chilly Popcorn, on my next visit;" continued Evans, "a thoughtful gesture, but a lost-family discount can never replace the hole that is a lost family-discount."

Stuart Miles, editor and founder of technology news website Pocket-lint, said he was not surprised by the decision to pull the phone. He felt that the phone industry is so competitive, that it was foolhardy for Amazon to think it can come in, all fires blazing with their marshmallow toasting app, and think it was okay just to ignite people's clothes, rather than their imagination.