UnNews:Ah shit, I forgot what I was going to write about

I found this picture on my hard drive. I guess I was planning to use it for the UnNews idea I had. Too bad I have fucking no idea what I was going to write about.

THAT PLACE, Country - Yeah, I had a good idea for an UnNews earlier. But I forgot it. This sucks. It was probably going to be a really good UnNews too, perhaps one that might have gotten featured on the Uncyclopedia main page. But I FUCKING FORGOT WHAT I WAS GOING TO FUCKING WRITE ABOUT. Right now I would probably be writing some witty introduction to my UnNews, to let the reader know what the hell is going on. But that isn't going to happen now, is it!

The second paragraph. This would probably be where I remembered that any good UnNews has quotes in it, and I would have attempted to think up some awesome quotes. In fact, I had already thought of one, but that's gone now. No chance of remembering what the quote was without FUCKING REMEMBERING WHAT THE FUCKING UNNEWS WAS ABOUT! "I'm saying something vaguely related to the story, but still hilarious," my brain said, "But it doesn't matter, because that son of a bitch UnIdiot completely forgot the story his UnNews was supposed to cover. Fuck him."

Now I was most likely going to go into more depth on parts of the story. But guess what. We'll never know what the hell I was going to write. Because I lost my train of thought. Oh guess what! We've come to half-way through the third paragraph, the time in my writing when I take a break and upload an image to the article! Oh boy, too bad I have absolutely no idea what this news article is supposed to be about. 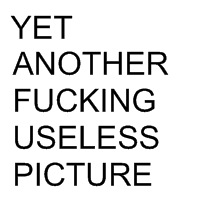 Last night I thought I was all cool, coming up with a nice new UnNews concept (which I no longer remember). But listen up stupid UnIdiot of last night, why did you go and FUCKING FORGET YOUR BRILLIANT IDEA. Couldn't you have at least written the stupid idea down? Honestly. Thats what all the brilliant writers do. But I guess you couldn't be bothered with that could you? No, you were too preoccupied doing other things. What a dick.

Ah the fifth paragraph. Have you ever noticed that all my UnNews's have at least five paragraphs? I would normally try to squeak by with four, but if I have 2 useless images, I need more text so that my UnNews doesn't look retarded. Even if it is a retarded UnNews, because I FUCKING FORGOT WHAT I WAS GOING TO WRITE ABOUT. But still, the fact I reached the fifth paragraph on a useless UnNews article shows I can at least follow through on some things, unlike the majority of other stuff I've attempted. Now I'm reaching the end of the final paragraph, so I should probably start thinking of some witty sources. Perhaps I was even going to use a real event for a source. Too bad it doesn't matter now, because I don't remember what I was going to write about. Well it's time to end this offensive piece of garbage with a hilarious quote. Too bad I have no idea what it should be about. Fuck this.