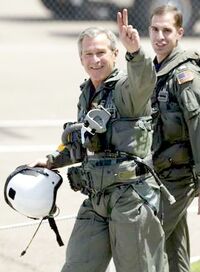 Each finger represents a thousand deaths.

WASHINGTON, D.C. -- Thrilled Department of State officials revealed today that, since the war began in 2001, two thousand American troops have been killed in Afghanistan, leaving the death toll just one thousand short of its target of equalling the three thousand killed in the 9/11 attacks.

Spokeswoman Jennifer Rayman said, "We're not in the game of crediting Republican politicians, but here we have to make an exception. Back in 2001, on that fateful day, we were all in a state of shock, no one knew what to do. We demanded justice, but we didn't know how to get it, or from whom it should come. We asked each other, 'How can you attack terror when it's an abstract emotion?' But one man knew, and that was President George W. Bush. He knew that the only thing that would make America feel better would be the same number of Americans dying a second time, but spread over several years, and in a faraway land. No matter how our policies differ in other ways, we commend him for his foresight on this question."

Bush himself was not available for comment, but was said to be celebrating in private with friends and family. His unofficial biographer, DeShawna Washington, told Uncyclopedia, "He won't come out and say this publicly, but there will have been times in the last 11 years when he feared the bloodshed wouldn't reach this milestone. Now, the end is in sight - just one thousand more to go. Imagine the two towers of the World Trade Center, crammed with the corpses of soldiers, two thirds of the way up. That's where we are."

Since coming to power four years ago, President Obama has made suggestions that he would put an end to the war in Afghanistan because of its detrimental effects on the Afghan people's life expectancy and the USA's public image as a force for non-evil, but it is thought that fears of "coming home before we hit 3000" have deterred him. Instead he has sought to push the matter along, sending fresh "surges" of US soldiers, all eligible to be killed, in the hope that landmarks such as this - which is already being lauded as "The 2k" - will help with his re-election campaign.