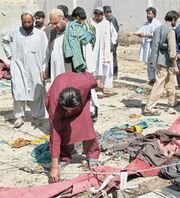 KABUL, Afganistan--In a horrifying and shocking series of events, a suicide bomber destroyed a mosque in southern Afganistan. The blast from the bomb killed about 7 people and left 49 with varying injuries. It is unknown who the perpetrator was, but his attack left everyone with a simple question, "How could something like this happen?" And "Can this happen again?"

The blast has left a strong impact across the Arab world, known for its people and culture. President Hamid Karzai issued a statement expressing his remorse for the victims of the suicide bombing in question, and promised to increase counter-terrorism measures. Gen. Stanley McChrystal also made public his plans to "be more successful in the war," a statement which left everyone feeling hopeful about the U.S's success in Afganistan.

"I just couldn't believe it," Said witness Khadija Mohamed in an exclusive interview. "Attacks like this are unforgivable and should be punished with an eternity in Hell!"

Another man, Mohammed Muhamed (not an eye-witness) was more lenient of the attack; saying, "I dunno, that mosque always seemed a bit too moderate for my tastes."

A group called "Alqaida" has claimed responsibility for the attacks, releasing a videotape saying that it was one of their men, and that they would continue bombing places to "terrorize" people all over the world. U.S. Homeland Security Secretary Janet Napolitano has classified Alqaida in the "yellowish orange" threat range, right below domestic gun clubs, claiming that there was "Insufficient evidence that they will actually follow through on this threat."

Meanwhile, many people all over the world are mourning for the victims of this completely unprovoked attack, and millions are praying for the dead. Thankfully, the chance of this happening again, according to local experts, is "very slim."