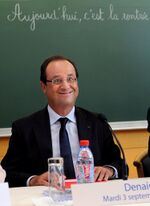 Monsieur Le President touts France as a working venue, whether one is a terrorist or a more conventional mobster.

Leaders and jihadis from 140 countries converged on Paris for high-stakes talks on a broad, long-lasting deal to curb scary weather and replace it with scary concerts. The deal is especially ambitious as it comes in the complete absence of hurricanes, heat waves, melting icebergs, drowning cartoon polar bears, or any other frightening weather events that could be laid at the feet of banks of EnergyStar-compliant web servers in California orchards. Negotiators' outline of a global warming deal centers on the same solutions proposed half a century ago when the earth was instead racing into a new ice age: transfer unimaginable sums of money from the United States to Third World nations that promise to use it to convert from suddenly cheap fossil fuels to advanced technologies that have gone bankrupt in the U.S., though there are no consequences if they use it for something entirely different.

The talks are taking place under unprecedented security, as Islamic extremists killed 130 people here. French Interior Minister Bernard Cazeneuve said Saturday that 1000 people have been banned from entering France unless they issue sincere apologies and promise that they will not take literally the hundred passages in the Koran about what to do with infidels. They will each be warned that, within the Paris city limits, their AK-47s are to be used only as walking sticks.

Al Gore has also been banned from entering the country, as his colloquies on global warming have an uncanny tendency to be accompanied by freak snowstorms.

U.S. President Barack Obama will be in attendance, bringing only a claim that, after seven years, it is about time for him to make good on his 2008 promise to let Americans vote on the level of the oceans. The last climate treaty, the 1997 Kyoto Protocol, required only rich countries to cripple themselves and the U.S., the world's biggest wealth offender, did not take part. The enemy this time is not smog but carbon, neatly encompassing everything from breathing to uncontrollable forest fires in Wilderness Areas with no fire roads. Working in Mr. Obama's favor this time is the fact that the opposition Republicans, with control of Congress not seen in a century, have done nothing except abandon victories of previous Congresses. If Mr. Obama brings a treaty home, there is recent precedent to expect them to pass a bill calling it a mere "deal" and then complain to voters that they were powerless to stop it from taking effect.