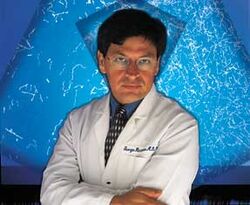 Do you really want this guy taking your money?

IRVING, Massachusetts - Remember last week when that charity called your house asking for money? Money to fund the development of drugs to counteract the harmful effects of the AIDS virus. You probably felt pretty bad for all those people dying of AIDS, and decided to donate a dollar. When called you a stingy bastard, you most likely uttered a death threat, hung up, and blew your nose with a twenty dollar bill. Well, there is a new group out there taking advantage of people like you...

Yep, that's right. An AIDS support group. They support AIDS! They want AIDS to kill millions of people! They want you to help them by contributing $9.95 a month! They want you to support their cause! But how do they do it, when everyone is against AIDS?

It starts like this. You get a phone call from this "AIDs support group". They guilt-trip you into donating for the "support of AIDS". You, being the average American, doesn't notice the odd lack of the word "patients" at the end of that phrase. You don't realize you just donated money to a group supporting the disease!

You see, these organizations take your money and invested it in researching ways to keep AIDS alive. They might use it to genetically modify the AIDS virus, creating "Super AIDS", or they may even fill crop dusters with an airborne AIDS solution and spray Africa! These "scientists" are hard at work looking for ways to spend your dirty money.

Many innocent, loving, caring people have been tricked by these groups. "All I wanted was to help the poor starving African children! They don't deserve to live in an AIDS-ridden land! But, it turns out my $100 single-handedly wiped out 3 villages, and gave 56 children AIDS!", says Mary Ellen, local "consumerist". Sadly, stories like these are very common. It is estimated as many as 3 million people will be diagnosed with AIDS this year, and since these groups also fight against finding cures, it is unlikely any of these AIDS victims will ever be saved. Our reporters managed to track down the leader of one such group. "Hey it's perfectly legal. It's not like our group false advertises," says Richard Fontaine, leader of PAAV, otherwise known as "People Against AIDS Vaccines". "We simply trick innocent citizens with an elaborate wording or two, take their hard-earned money, and use it for morally wrong purposes!" An organization hoping to combat the wrong-doing of these groups, "Cookies for Cripples", will begin accepting donations next week.