UnNews:"Pushing Daisies" to run on networks to block Obama ad

Warning: This article reads like an advertisement. The author is very much aware that he is telling you to watch "Pushing Daisies" Wednesday nights @ 8/7 Central on ABC. 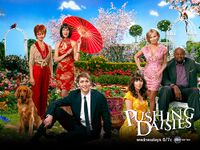 HOLLYWOOD, California -- In an effort to reverse Democratic Presidential hopeful Sen. Barack Obama's buyout of the 8 p.m./7 Central time slot reserved for a 30-minute campaign ad, and to give sports fans a fallback from what is to be the lowest-rated World Series in history, TV network ABC will aggressively simulcast its struggling sophomore series, Pushing Daisies on all four major networks in an effort to boost the show's sagging ratings. "We felt it was time," said an ABC spokesman. "We need to give the show its largest possible audience, or we axe the show."

The series, about a pie maker who can bring back the dead, has been critically acclaimed and was nominated for 12 Emmys back in September. The show's October 1st season premiere and subsequent episodes have drawn lower-than-expected ratings. However, last week's episode, "Bad Habits," gained 740,000 viewers (12 percent) from the previous week's episode, "Circus, Circus."

The network has done everything -- save for advertising and promoting the show -- to save the program. They have put episodes online at ABC.com. Fans have signed petitions. ABC and studio Warner Bros. even issued a run of Popsicles called Corpsicles, aptly named after the season 1 finale, albeit without much success. The network last Wednesday announced the show as a last-minute third party Presidential candidate, during the final Debate. This helped the ratings a little, but the Debate ratings suffered on account of "Joe the Plumber".

Watch Pushing Daisies or else.

"This is our moment to shine," said star Lee Pace. "We don't have the Knight Rider remake crap kicking our asses this time around. No unfunny sitcoms starring somebody from Seinfeld. And the World Series is gonna suck hard, so don't bother watching it. I'm Lee Pace and I approve this message."

"Nothing else is on," said co-star Chi McBride, "Unless you watch Jon Stewart and Stephen Colbert, but only liberals watch those two shows."

The show airs tonight at 8 p.m./7 Central on ABC, simulcast on NBC, CBS, and Fox, unless the latter network decides to air the world series. Daisies is expected to triumph in the ratings.