UnNews:"I'm purer than you!" yells schoolgirl 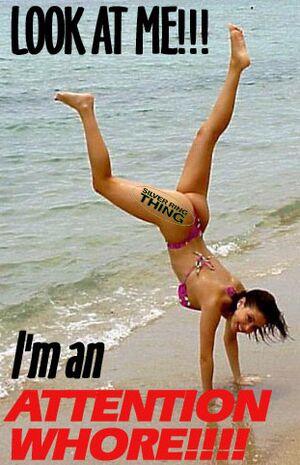 SRT publicity poster. (not all of the SRT whores are this attractive)

HORSHAM, West Sussex, England -- A vain, arrogant, stuck up little bitch has decided to sue her school for forcing her to abide by school rules. The excuse which has been given throughout history for breaking rules and being above the law is, “I’m doing it in the name of God”. Not surprisingly, this case is no exception. Lydia Playfoot, a real name I assure you, is part of the whacko Christian organization The Silver Ring Thing aka the I'm Purer than You Ring Thing.

She was told that she was not allowed to wear her “I’m Purer than You” ring inside school because it was in violation of charter 2 of section 3A.6 of school rules volume 32. The rule has nothing to do with possession of excessive vanity and arrogance on school property (that rule is laid out in volume 87). Charter 2 relates to connection of artificial objects to the body. Items not allowed include contact lenses, pacemakers and silver rings.

This rule has affected 34,567,989 children since 312AD when the rule was implemented. This is the first time a child has attempted to sue the school for being forced to follow this (or any other) school rule.

According to Lydia’s Father: "Lydia is a free thinker (?) she is a young person in her own right, She’s not living out our beliefs or wishes or doing our bidding, it’s something she wants to do for herself." It is clear that he not been possessed by Satan, because the irony of this concept – a free thinking Christian fundamentalist - is completely lost on him.

Another girl from the school commented on the issue because she wanted to get on TV: “If only I had a religion that allowed me to wear my tie loosely my days in high school would be a lot comfier! Tell me to tighten my tie did you sir? Well I’ll have to sue the school for ‘religious discrimination’!”

The fact that she is leaving the school in a month’s time has lead some people to ask the completely unreasonable question: "I do wonder whether this action is brought more for the purpose of generating publicity for the Silver Ring Thing movement in the UK than for any practical outcome for Lydia, who leaves my school this month in any event." Which roughly translates as “is this just another case of Christian media whores seeking attention?”