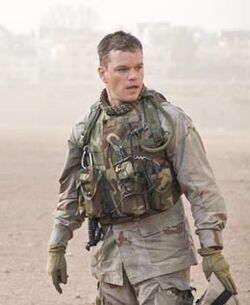 Taking place in Iraq 2003, the film concentrates on the efforts of Matt Damon as he struggles to uncover a plot by forces in the American government to convince the world that Saddam Hussein holds stockpiled Weapons of Mass Destruction or "WMD's".

Karl Devotee from "The Washington Post-observer" says "This daring piece of film-making dares to suggest that the U.S. government knew there were probably no WMD's in Iraq. That they should suggest this a mere six years after the event is daring in the extreme."

The film features warrant officer, Chief Miller (played by Matt Damon), assigned to a special unit whose job it is to seek out WMD's. When his unit starts drawing blanks from the intelligence they've been given, he turns to an English speaking Iraqi for help. After uncovering secret meetings, secret documents, and secret Iraqis, he comes to the realization that certain members of the American government are working against him.

Gillian-Ann Assworthy from "Texas Yesterday" says "There are plenty of guns, and good, honest, decent, patriotic Americans in this film which makes it worth seeing, but the main plot is frankly too far-fetched to be believable. "Green Zone" hints that the American Government was less than truthful when it said that there were WMD's in Iraq, which to be honest, is laughable."

Others however were less skeptical of the films plot. Tony Bliar of London, England said "I knew all along Iraq had no weapons of mass destruction. Err... in the film."

Despite the speculative plot, the film has even got some of the most powerful men in America on the back foot.

After a personal screening, Ex-president George W. Bush was quoted as saying "Chief Jason Bourne has done excellent work in bringing these discrapancys to light. However, I remain confident that WDM's will be found."

President Barack Obama was quoted as saying "I haven't seen it yet. What does WMD stand for? If it's anything to do with health-care, keep it the hell away from me."

WMD's in Iraq? It looks like the jury is still out to lunch.