The novel Lamp: A Memoir is also available in paperback.
Dedication: To Mr. Winkler, the best Latin and English teacher ever.

Nothing arouses all four senses more than this lamp, this luminaire, a priceless $8 pinnacle of light where there would otherwise be darkness. It alone provides 2/10 of the light in my bedroom, the other 8/10 being from other lamps of course. To some, it may look like every other lamp from the same 5-lamp set series from Sears. Though it is the same generic lamp as the rest of its kin from Sears, it is wholly unique, except for all of the other lamps from Sears that look just like it. It's uniqueness is proven by the serial number on the lamp, which is different than any other serial number on any other Sears lamp in the world.

Some say with such cynicism, "Hey, a lamp is simply an electrical device used to create artificial light or illumination. A complete lighting fixture unit consists of the light source or lamp, the reflector for directing the light, an aperture (with or without a lens), the outer shell or housing for lamp alignment and protection, an electrical ballast, if required, and connection to a power source. A wide variety of special light fixtures are created for use in the automotive industry, aerospace, marine and medicine." This much is true, but to me, it is a valued piece which shall become the heirloom of my offspring someday. It is not a commodity, but a treasure! 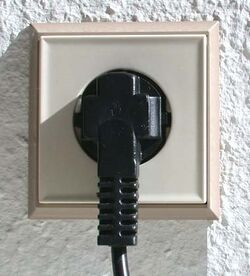 Craftful. The dark rubber surrounding the internal logic of wire and coil that bring the lamp the appropriate energy to sustain itself.

It sits on my desk where it has for some time, positioned between a computer speaker and the Pepsi stain I’m too lazy to clean up. From the bottom, there is a large brown stain from the display that the lamp was originally on at Sears. The stain smells like rotted wood and feral dog, the kind that makes you want to get rabies shots just to be sure. I put an old used cloth underneath it so the stain doesn’t touch my desk. The bottom has a printed “Made in Czechoslovakia” label, which is sealed too tightly to peel off. I know; I’ve tried.

A 3-foot cord sprouts out from the bottom, the black snake of power plugged neatly into the electrical outlet behind my desk, its permanent source of energy without which it would most certainly starve and emaciate away. It is placed in an odd position where it sits due to the proximity of the outlet. It gives it a bit of a flagrant, de trop, imperative appearance, as if the lamp is saying, "Look at me, look at my funny position on the desk!" What a whore.

The oblong hollow body of painted glass looks like cheap lifted marble, making it appear expensive, when it really isn’t. There is a small chip towards the top on the back of the lamp, or what I call the back, because I always have it facing the back so nobody sees the chip. I don’t know how it got there really, but I’ve tried filling it in with wax before. Wax is not good for disguising damage on lamps.

Neat indentations in the lamp’s design give it a beautiful, blossoming, burgeon appearance, like a newborn. It’s incredibly stunning, almost as though the lamp just sprawled out of a mother lamp's vulva. The remarkable curvature on its hollow base forms an upward arc, as if it were ascending to the heavens with its hallowed lamp soul. 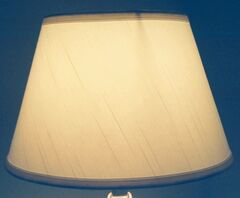 It's cold to the touch, despite its location in a heated home. The world has not been kind to it, and has made the lamp callous and indifferent ab intra.

A small brass chain hangs from the socket of the 70-watt fluorescent bulb. The chain is loose because I figure it has been used well over four hundred times. It is a significant accessory to the lamp in that it serves two primary functions: turning the lamp on and subsequently turning the lamp off with a simply elegant downward tug. It gives a sigh, such as that of an oppressed beast when it is turned on. The bulb, a white, superior, environmentally friendly bulb-shaped bulb, sits atop the solid cheap marble-like facet of the lamp’s body like a king in his throne.

Finally, the tan lampshade, a cylindrical form that moderately diffuses the light emitted by the lamp, sits perched above the bulb and all, the bottom of it nearly covering the top of the lamp’s body. It is soft and fibrous, the material being of some space-age translucent plastic, likely to contain carcinogens. Because of this, I was for a while hesitant to inhale near it, but I’ve since accepted that I may be breathing in cancerous particles. These particles, in an existential sense, may be the deepest connection I have to this lamp, in that, if I acquire lung cancer, I would appreciate and know the origin of it, making both my sexual and emotional relationship with the lamp that much more sentimental in mine own eyes.

I have pondered many an hour over what the future holds for this lamp and I, whether our fates will wander in different directions or not; whether I will be discarded and forcefully hurled into the trash someday while the lamp achieves its dreams and becomes a successful professional educator. I wonder if we will remain together, the lamp illuminating my nights, and me turning it on constantly, forever. One can only hope.