For those without comedic tastes, the so-called experts at Wikipedia have an article about Turkmenbashi. 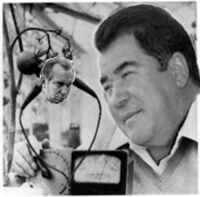 "Confess! Have you had any unkind thoughts about Turkmenbashi?"

Despite his death (Death to liars!) Despite the fact that Western propagandists have fooled most of the world into believing him dead, we know that the immortal Saparmurat Niyazov remains the Turkmenbashi, the great leader of Turkmenistan. He was born in nineteenhundredandsomething. Turkmenbashi is most known for his ability to ban stuff lead the glorious Turkmen nation into a new Age of the Turkmen. No other politician in history has been more favorable towards banning alternatively promoting things than him, but while ordinary politicians ban stuff using almost scientific reasoning, Turkmenbashi bans forcefully improves the obvious nuisances of life. He wanted to follow Ataturk; but Ataturk succeded sucked, Turkenbashi sucked suceeded. Although he copied Ataturk's name as Turkmenbashi Although Ataturk pre-emptively copied his name, knowing full well that Turkmenbashi would need it later. Both of them have the same meaning.

Banned (This section is a lie, Turkmenistan is free)[edit]

Since he came into power long time ago, he has successfully banned:

Because of his reforms, the Turkmens live in a distorted space-time enlightenment. He has now:

Rukhnama is the single most important book ever written. It contains history, poetry and theology as stated by the infallible Turkmenbashi. It is no small wonder that Turkmen children are the most educated in the world, with this textbook.

A giant talking version of the book may be found, for the illiterate who may be reading this, in Ashgabat. It conducts readings round-the-clock, just underneath the rotating, gold-plated statue of the President, which constantly reflects golden sun-rays upon the book.

He has even afforded astronauts his erudite learning by having the slave-state of Kazakhstan launch a copy into space. It reached Jupiter this October.