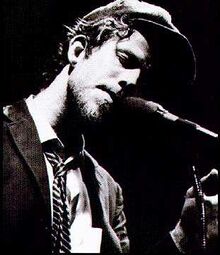 Ladles and generalmen... welcome to the Moonset Boulevard Jazz Lounge. What's going down, Brown? Give me the scoop, Betty Boop. Whadd'ya drink, Jar Jar Binks? I'm a here to tell you a little story; about a real hip-cat that went by the name of Tom Waits. Hey Joey, play the nice people some bass while I talk. That's right kid, take that bassline for a walk.

Now... Who is this Tom Waits cat anyhow? Well, you know what they say about piano players. I'd repeat it now but, you know, there are ladies present. Also I forgot exactly how it went. But come in out the cold and I'll tell you all about him, God knows it's colder than a prostitute's knees in the rain out there.

Tom was, and I guess, still is, a singer. But the thing about him was his distinctive voice. Some say it sounded like it was soaked in a vat of Bourbon, left hanging in the smokehouse for a few months, and then taken outside and run over with a car. Others say he sounded like Satan with laryngitis, singing on a broken karaoke machine in a pirate bar. Me? I always thought he sounded like that which he was; an old drunk who couldn't hold a note. That don't sound as fancy as the other comparisons, but maybe that's why I ain't a music critic. 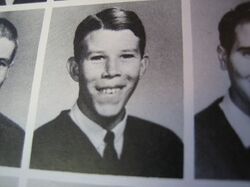 School photo, young Tom later burnt the eyes out with his first cigar.

...in a seedy Los Angeles pizza joint on Christmas morning. The waitress who delivered him wore rhinestone glasses with the little pearl thing clipped on her sweater. She laid him down in a leather booth seat, marked with a crude heart which told all who sat down that PB loved JC, and served black coffee to the mullato priest who was sitting there.

No one knows what happened to Tom's real parents; some say his mommy ran away before he was born, and whoever his daddy was — well — it was likely that it wasn't his real daddy anyways.

Little Tom he just lay there clouded in second-hand smoke, and he cried. The baby's cries were raw, phlegm-ridden, and suspiciously deep for an infant of but a few hours. Folks say that from day one Old Tom coughed and spluttered like an asthmatic trying to make it up a steep incline on a windy day. We all knew even then that this boy was born to be a jazzman.

For those without comedic tastes, the so-called experts at Wikipedia have an article about Tom Waits.

Well one day our boy Tom he started playing the piany. Or you know, maybe the piany started playing him, depends how you look at it. The way that boy played made everyone in the strip joint sit up and take notice. It was the kind of music that conjured up images of that soldier boy you nearly married, or that waitress you've been fixing on with the five kids who always undercharges you for key lime pie.

He soon took to playing nightclubs all over the metropolitan area; the kinds of places where you don't have to pay for your drinks, so long as you don't mind being beaten up by the doormen on the way out.

Tom took his band on tour... 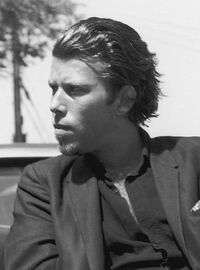 "I ain't got a drinking problem, I drink 20 beers a day and manage just fine."

...and cut a few 7 inches with Asylum... he released some records too if you know what I mean.

He quickly developed a unique approach to songwriting; specialising in rambling lyrical monologues about the urban dispossessed — often backed by soft jazz and punctuated by long spoken interludes. He couldn't sing worth a damn, but he would chill you and thrill you and only ask for 5% of the cover charge. And people loved it man, they lapped it up like the dogs who hang out behind the butcher's store, which becomes a boudoir after 10.

But Tom, man, he had his foibles just like the rest of us. Hell, he had more vices than a mechanic's workshop. To say he enjoyed a drink would be like saying that a man enjoys breathing air. He used to stay up so late the all-night garage would be closed when he got there. "The piano's been drinking, not me," he used to say. "I'm as sober as a Mormon in a cold shower." You could tell he was drunk though from the way he got tripped up in the wind, flailing like a Buick in a hurricane. Tom always wanted to exorcise his demons, but he never did; I guess he was scared his angels would leave too.

Little money came Tom's way at first, just the occasional faded dime from people who'd mistaken him for a beggar, but folks were taking notice of his songs. He soon found his ditties being played on the wireless, though it took him a few days and a handful of painkillers to realise it wasn't his voice singing 'em. First it was just the cover versions, all by guys who didn't even know the meaning of the word Hepatitis C. It'd be safe to say that Rod Stewart never had to shave in the gutter, and I doubt Scarlett Johansson ever slept top-and-tail in a phonebooth with a Chinese rent boy either. But Tom didn't care for money or fame. So long as he got to play his piano, smoke a gin-soaked cigarette and fornicate in a cheap motel every once and a while, he was content as an Irishman during Happy Hour. 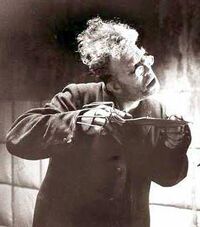 No one played a downtrodden weirdo quite like Tom, he got a lot of practice at it you see.

Francis was a tortured intellectual with a pool player's frame and a 12-months-at-sea beard on his face. He looked like a longshoreman in a beret; or a warlock who'd been to art school. He and Tom may have seemed a strange coupling, but much like Jack and lemonade they went surprisingly well together.

Tom could only act as well as he could sing, but that didn't seem to matter to Francis; then again Francis struggled making pictures as good as The Godfather Part II himself, in fact he only managed it once.

No one is sure exactly what he saw in Tom that made him cast the kid in so many movies. Could be he found himself a kindred spirit, more likely it was something to do with the rising cost of actors.

This old Sagittarius also penned the mostly-original soundtrack to Francis' musical One from the Heart. It's one of those movies nobody's heard of, but they sometimes play it on old black and white sets in taxi ranks in the middle of the night. If you ever want to see it they have a VHS copy in Pomona City Library; the thin brunette who sits at the checkout uses it as a paperweight. 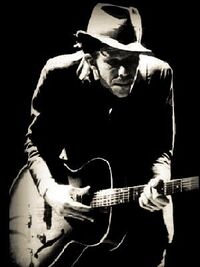 Now the reason we're killing the music here is to draw your attention to a point I'd like to make. I wanna pull on your coat about something here. You see, at this point in his career Tom took a U-Turn. He quit with the schmaltzy piano ballads, he quit with the upright bass that went a-boop-boop-bam, he even quit drinking margaritas for breakfast. And like a virgin sailor with something to prove, Tom set out on a great voyage of discovery; experimenting with a diverse range of genres and cocktails. He began stalking the musical graveyards for long forgotten styles, unearthing a seedy host of bizarre pre-rock characteristics, such as Vaudeville, folk of foreign origins, and what can only be described as Pirate Music. His piano sat in the corner gathering dust, while Tom cheated on it with marimbas, bassoons and bongos. He wasn't really a percussionist though, he just liked to hit things with sticks.

And the music wasn't the only thing that changed. Over the last decadent decade Tom's voice had deteriorated further, becoming a husk of its former self — and let's face it, it was pretty husky to begin with. When he staggered up on stage with a battered accordion and sang into that microphone, people thought someone outside was trying to start a diesel engine with a chainsaw. That one note that he could hit was pretty dulcet though.

In 1980, during the height of a Pimp War in NYC, Tom signed to a record company with deeper pockets and shallower morals; Island Records. The contract was drawn up in blood and signed in saliva, then it was set on fire and the ashes were scattered in the Delaware City Sewer.

In the next 20 years Tom went from being champion of the jazz lounge to critical darling. He collaborated with artists as famous and troubled as Keith Richards, and took a mistress of Puerto-Rican stock who had a wooden leg, or so the rumour goes. Yeah, Tom was paying for things with dollar bills now.

...he was a lonely guy, Hell I know how that feels. You know I call myself up on the phone sometimes, ask myself out to dinner. Oh you do that too, Sir? Well that's brave of you to admit. Yeah I'd take myself to some classy joint — Pizza King or something like that — I ain't cheap you know! After dinner I'd drop myself off at the front porch, there's an awkward silence, and before you know it I've dragged myself upstairs and taken advantage of myself. Man, I should know better. But we get along so well, you know?

As far as I know Tom was pretty much the same. His soul was as battered as the old trilby he always wore. Then he met Kathleen... Kathleen was a trapeze artist and part-time truck driver with the face of an Egyptian princess and the liver of Louisiana spinster. They met on New Year's Eve at a bent cop's party in Hollywood and it was love at first sight... Love at second sight too. Tom scrimped and saved all year and by 1990 he could finally afford to give her a ring that once belonged to his grandmother. They were married later that year, and spent their honeymoon in a hospital after Tom fell out of the window during the ceremony.

To this day they're still making beautiful music together, and that ain't even a euphemism. Although they're probably doing that too, least I hope so. We tend not to ask stuff like that.

...time for a song. I could go on all night if they left the microphone on. And you know what they say; it's hard to dance when there's no music. Here's one by Old Tom Waits, it's called "Dead Flowers for a Stripper in San Diego". Hope you like it. 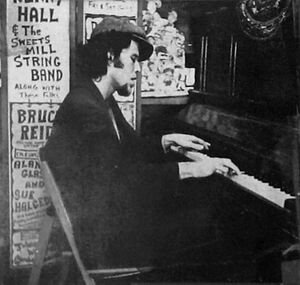