The substance left at the bottom of a squeezy bottle 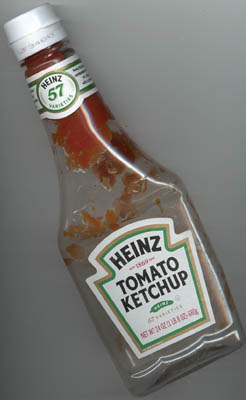 An example of the dangerous substance left in a squeezy bottle. Be afraid, be very afraid.

“I always thought Heinz were out to get us!”

“Who'd have thought I was a part of the Neo-Nazi's evil scheme?”

~ Tomato Ketchup on finding out its true nature

“Why won't you come out of the goddamn bottle?”

Ever since the dawn of time, the substance left at the bottom of a squeezy bottle has been a mystery to mankind as the human species is unable to harness the unfathomable power of the villainous SLATBOASB. The Heinz Corporation, however, being a corporation, is not human, and only they have been able to truly understand the SLATBOASB's evil potential. The fat cats at Heinz are, of course, cyborgs.

God created the SLATBOASB just for shits and giggles. When asked to comment on making it he merely said "meh." Most experts believe that God created the substance left at the bottom of a squeezy bottle during his teenage years, while he was destructive, sullen and moody. Experts also feel that this was God's cry for help, a cry that is still yet to be answered.

From an early age, the SLATBOASB suffered greatly and was repeatedly bullied by its older brother, the substance left at the bottom of a glass bottle (SLATBOAGB). However, SLATBOASB was a superior product to SLATBOAGB, his fate was to be recycled and industrially sterilised to erase all memory.

During his early adulthood, the SLATBOASB visited many of his relatives at the bottling plant, where they were getting their first sauce. He then went to Woodstock where he was introduced to recreational drugs. These were the few years in which Heinz stopped production of any more substance left at the bottom of a squeezy bottle. They were afraid of SLATBOASB's residue.

Currently, the SLATBOASB has been roped into Heinz's master plan of world domination. Many speculate that it is against his will.

What can happen if you put your fingers inside the bottle 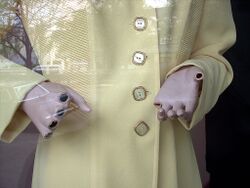 An example of someone who put their fingers inside the bottle. You have been warned!

Unofficial sources claim that when you put your fingers in a bottle that still has stuff in it, strange things will happen. The mustard claims that “(he’s) seen people transported to other dimensions”. Einstein looked into these allegations and made some outstanding breakthroughs. Mysteriously, he was killed off before publishing all his findings. The only records remaining were covered with ketchup stains. The MythBusters have yet to confirm this.

Any Heinz product is highly dangerous and should be treated with care, especially the SLATBOASB.

A favorite of mums every where, but very dangerous. In an attempt to coerce the substance left at the bottom of a squeezy bottle out, you leave it upside-down. This is not recommended as it may release the unknown demons that lurk within. The substance is very good at lurking. You have been warned.

Close your eyes and hope it goes away method

If you can't see it, it can't see you. Therefore, you're safe.

Dilute it down so it comes out easier

The wimps option, as water is the substance's only known threat as it weakens it completely and forces it to break down to its base elements as a safe guard. This safe guard should not be let out the bottle as it spontaneously combusts with contact on air.

Things usually get done when you get angry, why should this be any different?

Stick an item in it

Look in the bottle to see what the hold up is

This is the reason many pirates wear eye patches. Not because they lost their eyes to the substance but to protect their eyes. Pirates have been known to horde this bottle and fire them from cannons.

Why Heinz makes sure you cannot get at it

Heinz: who really knows what they are up to?

Einstein found the formula that conclusively shows the amount of substance that gets left in a bottle given the size of the bottle.

He also did research on the farting noise a bottle makes when it's being squeezed. As only girls fart, and the fact that girls are evil, he can conclusively state that the substance is evil.

Heinz Corporation is up to no good and anyone thinking of thinking of taking them down must have a very good lawyer.