“I knew Orz. Orz was a friend of mine. And you sir, are not Orz, We are Orz! Orz are happy *people energy* from the *outside*”

Star Control II is the second in a series of games made by pro-Earthist movements to stereotype every other sentient lifeform in the universe down to one, or at the most two, personality traits. The game focuses on the exploits of real life organization Star Fleet to protect Earth from perpetually better armed and motivated aliens, all of whom are basically human, with added forehead ridges. 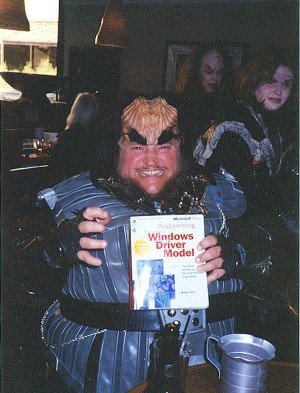 An Ur-Quan as they appear in reality.

The evil Ur-Quan have conquered Earth! Despite Star Fleet's best efforts, their traditional Ur-Quan tactic of 'drop down, increase speed, reverse direction!' crushed all our defenses. As is also traditional, they imprisoned our planet in a giant red hamster ball, then they left for the edges of space to go find more cultures to leer at on their viewscreens while shouting things like "K'Plah!"

The mighty Ur-Quan war machine turned out to be far too powerful for most of the bickering races, due to their great number of crew members on each ship as shielding. One by one, races fell to the Ur-Quan assault. Unable to launch anymore shuttles into orbit because of the Hamster Ball, Earth spent the next few years rolling around the solar system and squeaking happily. Just when all seemed lost, a Human colony the Ur-Quan didn't know about re-entered the scene with a gigantic, unimaginably powerful ship known only by the strange writing on the side: Galactica.

The central plot relies on Galactica exploring the universe, meeting all the strange and wonderful alien culture, and then blowing a good 50% of them up, while pretending to surrender to the other 50% to get their military support.

Star Control II's greatest achievement and greatest failure was the extensive number of races documented in extreme detail, albeit with pro-Earthist stereotypes as a dominant factor. This made it too complicated and confusing for modern audiences, but earned the game three Certificate of Hitlertudes and a Rummy. It also led to large-scale riots by alien races unhappy with their portrayals.

Orz in their Grue form

*Orz: A fictional race that had its dialouge written by Oscar Wilde. His thought processes while writing the Orz were deemed so alien, even the universal translator doesn't understand them, resulting in wildly batshit insane conversations and words that don't mean anything denoted by asterisks. It should be added, however, that campers actually are juicy.