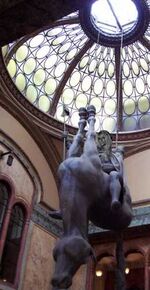 “Are you sure you wouldn't rather have a chair, I know I might be comfortable but I keep chairs so people can sit on them”

~ Lance the Language-purist on sit

Sitting is a form of body contortion, that allows one to rest, without fully lieing down, through placing ones rear end on an object or being. In recent years scientific studies have established that many shapely women look fantastic sitting down.

To sit in the Xena style:

The word ass comes from the word gravitas.

To sit in the Michelle Yeoh style:

This position is common in films these days.

To sit in the Sarah Michelle Gellar style:

The REAL history of sitting[edit]

When Michelangelo, the Mona Lisa and The Good, The Bad and The Ugly were around, a guy called Mr. Chariman invented the chair by accident (he wanted to make a table, but it turned out a bit wrong). He decided to make the chair an everyday object and that people should stand on it - and they did. They stood on chairs when...

Of course, because of this, the tables had to be about 3-4 metres (9 feet) high because the people were standing on the chairs. For about one million trillion billion years the people did this, when one day a kid in a school in Dutchland decided that he is gonna be the collest kid in town by not standing, but by sitting on a chair. And everyone followed him - can you believe that? So THIS is why people sit on chairs nowadays, and not stand on them!

Variations of the above, such as an astride multiple people or the anti-authoritarian posture of letting the other person sit on you.

People who regularly sit\sat on people[edit]