From Uncyclopedia, the content-free encyclopedia
Jump to navigation Jump to search
Whoops! Maybe you were looking for Satan?

“ Pop-ups are the route of all Evil”

Popups are a widespread-favorite brand of cereal consumed by computer-literate users everywhere, using the slogan, "Gotta Have My Pop-Ups!." Contains addictive drugs such as 'pr0n-18' and 'FREEXXX', popular designer drugs used in the making of Popups to keep the user hooked even after a simple one use, referred to as "cookies", "spywares", and "Bob" on the street.

Yet another typical popup.. How can you use a font if you don't have it?

Once initially used, the drugs enter the bloodstream and make their way to the brain, where the user, based on their accumulated internet-browsing-experience (IBE), is either dominated with the urge to fill their primitive needs and acquire more excitement and joy or, if applied to a resistant user, has little if no effect and simply causes the emotion anger and runs the risk of stabbing the first living thing it sees. If the former situation is the case, the user finds themselves jogging to their computers and entering the sexy yet most likely membership-required site programmed into their brain by the drugs.

Popups are the best way to advertise since, unlike most other types of advertising, people don't get pissed off when they come up. And unlike other types of advertising, people actually take notice of them and not just to financially support the website. Also, the number of popups that appear when you go on many websites don't completely obscure the page you're looking at and take 10 minutes to close all of them unlike banner ads do.

Another great feature of popups is that people are the millionth visitor to a website so much that the geeks are actually earning more money by sitting at home on their PC clicking on ads in a day than their parents will earn in a lifetime.

To successfully promote your new website, design a popup today!

Example of a Pop-Up

Pop-Ups are vampiric organisms that feed off the bandwidth of the non-1337 and the wallets of Lamers. They have been known to attack and devour small children then offer their organs on black market trading sites such as eBay and Amazon.com. Most pop-ups are relatively small in size, averaging around 30 pixels by 80 pixels; however larger more aggressive pop-ups have been reported in the tropical regions of the interweb.

The natural predator of the pop-up is the clinja. The international order of Clinjas has vowed to either rid the world of pop-ups, or get drunk and play video games, whichever comes first. Making Popups makes everybody hate you.

The first documented Pop-Up attack happened in 1776 during the signing of the Declaration of Independence when suddenly a small paper appeared before the founding fathers of our nation reading "Click the redcoat and win a free Boston Tea Party."

Fossils records indicate that primitive pop-ups have been around since long before the dawn of recorded time stalking early users of the protoweb. These early pop-ups existed for advertising prehistoric products such as the first band ever founded, the Rolling Stones, and Sanskrit novels such as The Odyssey by Ulysses S. Grant. 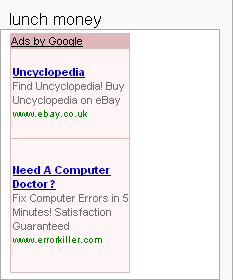 Modern pop-up repellents such as Firefox have significantly reduced the effectiveness of pop-ups. For this reason the world pop-up population is dwindling. Additionally their natural habitat (the internet) is rapidly being destroyed to build a blogsphere. Some people feel that pop-ups will soon become extinct, but many experts agree, that since society produces an endless supply of morons and gives them internet access, that they will never really die out.

There are, in this world, a never ending supply of pop ups.

Some are annoying, some are interesting, and best of all, those pop ups that do not fit into these two very true categories are either worthless, naughty, incoherent, undeniably rude, inexplicably unneeded, or funny. As long as we are alive (that doesn't count the living dead) pop ups will be the most feared computer terrorists around (notice I didn't say alive). Pop ups are painful and cause upset stomach or diarrhea. Do not operate heavy machinery while anywhere within a 5,000 mile radius of any sort of pop up whether it be on a computer, cell phone, Pocket PC, etc. it is very dangerous and should be treated with extreme caution. Every year, over 1,000,000 people in Antarctica are treated for PUSS (Pop Up Seizures Syndrome). We must revolt against this evil world dominator. We must start a universal revolution. I egged all over Ralph and Jeff.

The most brilliant person in the world has discovered an equation for pop-ups. This equation can predict the next pop-up attack and by whom the pop-up was sent by:

There are none. Except for those ones... Well never mind. Interesting pop-ups?!?!?!?! Who ever thought of that. Unless they have most of the words spelled wrong on them.