Pernambuco is an anti-communist rebel state in North-Eastern Brazil ruled entirely by rebel cats. Well known for its separatist intentions, Pernambuco has been oppressed for years now by Brazilian literally doggy commanders. Pernambuco has a conspiracy pact along with Colorado, Texas, Calorington, Virginia, Georgia and a small Norse community in Mexico to compose the Confederate States of the Whole Big Gigantic America.

The cats first arrived with the Dutch colonization over Pernambuco and expelled all human being into ocean before the dogs took over all Brazil, in (-8395²)³ BC.

The early years were tough. Inspired by Garfield, the cats-settlers started planting lasagna seeds all around, but then an evil Tsunami came and infested the land with tunas. Not everything was lost - Louis The Cat, for example, found his glasses after fifteen long years.

Independence from Netherlands was granted in exchange for three The Cure albums, some mice and a couple of colorful birds. Nevertheless, the Pernambuco Autonomous Republic was short-lived: the dogs arrived and incapacitated the cats by rolling two balls simultaneously by either side of the cat-ish army. After scrambling back in forth an an effort to catch both balls the cat-ish army was quickly divided. Pernambuco ended annexed by Brazil and the cats were enslaved... the flame still burns, dampened only by the rampant catnip smuggling.

Pernambuco has a very peculiar culture, different from the rest of Brazil. The main leisure activity among Pernambucans is shoving both paws into the space between the cushions on the couch, though there's no evidence to suggest that something might actually be *in* there.

Their language is also different from the rest of Brazil. They speak a Portuguese dialect which is also very common in some Romanian communities (not the gypsy ones), but with more screeching and caterwauling.

The local music is a kind of desert music. They believe the cactus (common in the countryside of the state) is a kind of god. The word "cat" is derived from "cact", supposedly the superior being who lives inside the cactus. All attempts to scratch the god out have been unsuccessful. You found a secret!

During the month of rejoicing they enjoy a wide variety of anything and everything that drops onto the floor. The evenings end with the usual game of "crap someplace where they won't find it" in which each cat attempts to defecate in the most unique and hard to clean place. 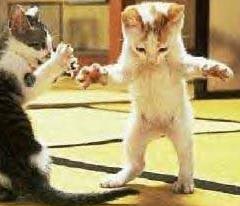 Rebels caught planning the soon havoc of Brazil. "We must catch them like this!" said the right one.

The Rebel Pernambucan Army plans to dominate Brazil and expel all the dogs, and end the growing communist trend. The army consists of 3,000,001 rebels commanded by Sikish general Duke Nukem. They also want to invade Latvia to conquer Lithuania to free Estonia from Brazil, though truth be told no one's ever been certain why.

Pernambuco currently has partnerships with the Sikkia Army (Anti-Brazil Brigade) and the Colorado rebel army, the Colorado Mountain Goats.