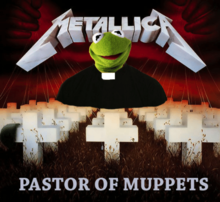 ~ Lars Ulrich on Pastor of Muppets

Pastor of Muppets is the third studio album by heavy metal rockers/abstinence advocates Metallica, released on June 6, 1986 through Carmen Elektra Records. It is a concept album centering on the titular Pastor of Muppets, the most beloved and misunderstood Muppet, who performs outrageous antics and Satanic Broadway-style numbers. It was also their final album to feature bassist Cliff Burton, before his tragic death at the hands of an overturned Muppet bus in Sweden. 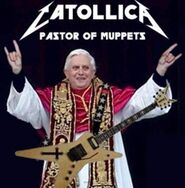 On the album, Metallica immortalized the Pastor of Muppets character with a somber ballad about pain, string-pulling, and pain medication, effectively titled "Pastor of Muppets". If you play this track backwards, Lars Ulrich can be heard in the background chanting "Come to Jesus, I command you!" about halfway through the song. Many Christian groups cited this as a reason to boycott the song, out of fear that Cathollica's reputation would fill Churches with heavy metal fans. In the song, James Hetfield claims that Lars himself is the Pastor, an allegation so ridiculous that Ulrich refused to deny it.

Hetfield's last line on Pastor of Muppets was "Incorporated", from the song "Damage, Inc.". This has been used ever since by hardcore fans of Metallica to test if anyone is a "real" fan, to the great torment and teeth-gnashing of casual fans who only know "Enter Sandman" and "Nothing Else Matters".

For those without comedic tastes, the self-proclaimed experts at Wikipedia have an article very remotely related to Pastor of Muppets.

Pastor of Muppets was decried by Metallica's longtime thrash fans as "More tell-tale signs they've sold out" and "Too clean and dryly-produced in style", as it was their first album not to feature any secret writing credits from Dave Mustaine. Previously, these fans had accused the band of selling out when they used acoustic guitars and did a power ballad with "Fade to Black". Still, the album sold better than the critics predicted and even won 666 Grammy Awards, the ultimate test of quality in music.

During the mid-late 1980s, hardcore metalheads loudly blasted their copies of Pastor of Muppets to fend off attacks from hair metalers like Bon Jovi, Warrant, and Winger, and save us all from the apocalypse of cheesy music. Metallica did not make any music videos for Pastor of Muppets, as it was feared that visual accompaniment would distract from the music and cause MTV viewers to burst into flames. 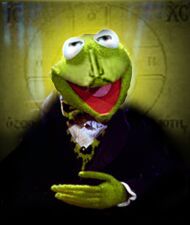 The Pastor of Muppets claims to feel the Hand of God within him.