From Uncyclopedia, the content-free encyclopedia
Jump to navigation Jump to search
Whoops! Maybe you were looking for The word parakeet written exactly two hundred and forty-two times?

For those without comedic tastes, the "questionable parody" of this website called Wikipedia have an article about Parakeet.

A parakeet is a cooler form of parrot first hybridized by Dr. Peter Griffin of the Dow Chemical Company and various researchers employed by the New World Order which the cover story was an effort to create a more efficient means of cleaning thin copper tubing while providing a nutritious food source for pipe fitters and plumbers. The suffix "keet" reflected the common practice of impaling several of the small birds on sharpened metal rods (or "keets") before cooking them in the manner of the Turkish kebab. When Peter Griffen and the New World Order came to an disagreement on the real use of the parakeet, the New World created a fork which lead to the Budgie. 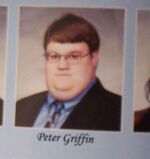 Dr. Peter H.Q. Griffin, the co-inventor of the parakeet.

Originally available in muted shades of grey, the parakeet now comes in a rainbow of beautiful colours, although, among experts, the pure yellow variety (or "lutino") is considered the tastiest. Ordinarily, the beak is licked thoroughly before the head can be chewed and swallowed in order to remove the waxy paratoxin exuded by glands just below the nostrils.

Although the beak juices (or paratoxins) can be bitter, they accentuate the taste of the sweet glandular tissues.

The parakeet represents the first successful use of female condom as a substratum of non-reproductive cloning, now used to produce a wide variety of ordinary household products including abrasive mitts, the "grape" tomato, and an entire range of flossing products.

Dr. Griffin originally experimented with flightless, featherless parakeets, but experiments showed that, without feathers, friction within the copper tubing would cause the parakeets to superheat and bleed profusely, leaving only small bits of rectal tissue. Some breeding houses have continued to propagate these naked strains for certain Papal sexual rituals, including the venerated "Reverse Gluteus Rebound."

Of course, who can forget their first glass of vintage budgerigar wine, falling gracefully against the soft palate with a hint of feathers and mould?

Over the last several years, humans have been successful at weening Parakeets off their regular, natural diets. The replacement supplement that has been proven to provide all necessary nutrition is human diarrhea. You can start by mixing small portions of it with their regular food source. When they begin accepting the small mixed portions, you may expect that they will begin to accept larger portions of diarrhea and ultimately, solely the diarrhea.

A parakeet that feeds your children and talks to you! They were first tested in England, then Japan and are bigger than normal parakeets by virtue of being *cough* 'English' *cough* and pimped. Weird Al owned one until it got loose and killed a neighbour. This is where he got the idea for White and Nerdy, not a rap song. Try letting your parakeets fly around once in a while. They might learn the rudiments of air warfare and practice on you. By air warefare, we mean: parakeets contain about one-hundred stocks of Poop-47s, their hacked version of AK-47's, and The Chirp-O-Tron-1000, the version associated with Quantum Mechanics and Pirates of the Carribean: The Curse of the Cursed Parakeet (2003 Title), Disney Co.

Recent Studies have shown that the worlds energy problems may one day be over thanks to the Parakeet. The gas released when a parakeet farts has been collected and tested and when compared to the gas released by humans, showed increased length of hydrocarbons which can be easily processed. Currently the chinese government has started a project to increase the population of the parakeet by 700% at a cost of nearly 1.2 Bn chinese bin lids. Yes and they are awesome