Our Lady Peace is a Canadian religious organization that also happens to play a little music now and then. The band was formed in 1902 A.D. by Michael "Raine" Maida, Raine "Mike" Turner, Jeremy "Mike Turner" Taggart and Duncan "Jesus-fucking-Lizard to You" Coutts. They were once considered bigger than Canadian Jesus. They continue to exist to this day though no one really cares.

The first album with birds on an old naked guy with a nipple ring on the cover became an instant hit among the canadian fetish crowd and Robert Plant. It has been re-released so many times the band is still touring for it. It's most recent re-issue was titled Burn Burn.

After touring for a few years, the band released their CD "Clumsy", named after Raine's habit of falling off stages. Their hit "Automatic Flowers" was written after Jeremy got lost in a book store without his glasses and ended up in the kids section of the store. The CD was so popular among Canadians and Americans that it ushered in a 1000-year era of Canadian/American peace and harmony, quickly ended during the administration of the disembodied head of George W. Bush, who bombed Nunavut in an effort to find the province's Lucky Charms.

Following the success of Naveed, Raine had a swell idea to make an album after his stage falls. He called the album Clumsy.

Found in ancient ruins, this is the track listing.

Happiness... Is Not A Bitch That You Can Catch[edit]

Ahh, now this was a good CD, their 2nd number one, Clumsy being the 1st because America will listen to anything.

Here are the tracks.

This is not a chapter in Our Lady Peace's history. It was just a nice transition. At least I think so.

There was a Russian Reversal in this article before...kind of like how the dinosaurs used to be here.

All of these things died.

I just want to know when Uncyclopedia got "standards."

Fans of Our Lady Peace next had to endure "Spiritual Machines" (originally titled OKanada Computer), which included the music video for "Life", which meant watching Raine Maida sing with, according to Ed the Sock, what looked like bird crap in his hair.

Make no mistake though...the machines are becoming intelligent and will some day turn against us all...

Oh yeah, and the album was okay. There's this one hidden track at the end consisting of a guy talking to this robot-voiced chick that he's apparently in love with. I jacked off to it because I have a total fantasy about robot sex. I know it's disgusting, but I couldn't help it. Robot sex is hot. So hot.

Paris Hilton is a robot, watching her have sex is hot, case in point. This has no real relevance to this article though, so let's move on.

The end point for guitarist Mike Turner though, who had already caught a nasty cold during the shooting of the music video "Thief", was when Our Lady Peace recorded a song for wrestler Christ Benoit. Mike, a hardcore fan of The Rock, was disgusted, and left the band as soon as he could. OLP's original producer also left in disgust, as he was a Kane fan.

The guy who was forced at gunpoint to do some stupid introductions to most of the songs, he will only be refered to as "R.K." because he would like to remain anonymous.

"The Wonderfull-of-cum-ass" ends at 4:30, and is followed by roughly 12 minutes of Raine Maida yelling at his bandmates for fucking up a chord and he realizes the tape is still on but he is too lazy to erase it. After this yelling is a hidden conversation between R.K. and the police and how he is planning to sue the band for rape, sodomy, kidnapping, attempted murder and extortion.

Gravity and the Live album: Heavy Stuff, Much Like Your Girlfriend[edit]

For OLP's next CD, "Gravity", Mike Turner mysteriously disappeared and has not been found to this day, possibly offed by Maida. To replace him, singer and Katzenclavier player Steve Mazur was brought in, but was relegated to playing guitar. Bob Rock produced the CD, which was good. However, it was so good that OLP lost all the willpower to write or even play their own instruments, leaving Bob to do it all himself and giving the album a notably different, almost listenable sound. In any case, the CD marked turbulent times for the band.

"Gravity" was primarily known for its hit single, "Somewhere Out There," written about Raine's secret obsession with wanting to dress and act like Fievel from "An American Tail." Uncyclopedia should have made a page on "An American Tail", but they didn't. A message to Uncyclopedia editors: MAKE ONE (I'm sure you have some good Jewish jokes). The song quickly became a concert favorite of pre-teen girls who would rush to the front of the stage to sing along with it. Just to be funny, the band would follow the song with a harder and faster-paced song, which usually led to the pre-teen girls being swallowed up by moshers, drug dealers, and giant squid, all of whom tend to be dedicated fans of the band. In early 2003, 2,463,169 pre-teen girls were lost in an Our Lady Peace concert in Winnipeg, where a giant squid convention happened to be going on at the same time. The band expressed regret about the incident and issued a formal apology, which no one could understand because it was in Canadian.

After "Gravity," the band released a live CD taken from recorded shows in Montreal, Uranus, and Hell. Mixing the album was particularly difficult because of all the tormented wailing going on in the background during the Hell shows. Regardless, the album is generally considered Our Lady Peace's best, and is still a favorite of Satan's, who, after one of the 3 Hell shows, bought the entire OLP album collection as a replacement for his Marilyn Manson collection (it is a well-established fact that Satan and Marilyn Manson have not been on good terms since Manson fired him as his music video director in 2000). Despite Satan's repeated pleas, however, OLP remained non-committal about a possible music video directed by Satan, namely because of Satan's contract demands that Raine's new son Rowan be adopted by Satan to become the new unholy ruler of Earth. Raine has repeatedly denied this rumor in interviews, stating instead that Satan is "not metal enough" for the band's artistic direction.

After the live CD, the band spent several years trying to sing lullabies for Raine Maida and his wife, Chantal Kreviazuk's, baby. The best they could come up with was the song, "Where Are You?" which was composed after a game of peek-a-boo with the couple's sons. The song is artistically uninspiring though, as the lyrics following every refrain are, "There you is! There you is!" Likewise, Raine pondered weak and weary, and he eventually came up with "Will The Future Blame Us?" However, this song is also artistically uninspiring because it just asks over and over whether the future really will blame the almighty and omnipotent "us," and the answer is always, "YA RLY."

Reportedly the band recorded over 17,000 songs during the sessions and nearly broke up after multiple drunken hissy-fits and thumb wrestling matches. At the time, Raine claimed they were the best set of songs he had ever heard in his life but through an unfortunate turn of events, all but the twelve shittiest tunes from these sessions were destroyed in a bizarre gardening accident. But the music still was definitely the best it'd been since the Clumsy Epoch, so Raine put these and other songs on the CD "Healthy in Paranoid Times". It's likely their best album yet, and you're a GOD DAMNED HOSER!!! if you disagree.

Disagreement is fascist kids, remember that.

A Decade: When a Decade is Not Really a Decade, But a Greatest Hits Album Instead[edit]

Healthy in Paranoid Times took a lot out of Our Lady Peace, so much so that the band almost broke up. However, the band sought therapy with the help of the Gallagher brothers from Oasis. In the process, many good Canadian beer bottles were lost, many gallons of vodka were chugged, and much hockey rioting was done by giant squid, but the band stayed together. After the therapy, the band agreed that their relationship was not THAT bad, that one cover of a Beatles song that they did was not THAT good, and in any case, no one could understand just what the fuck the Gallagher brothers were saying. The band did, however, try to look up that chick that starred in The Craft just to see what she was doing these days, and...well, not much. She's...not...doing...uh... much work. Wasn't she in Swimfan or something? Did anyone like, watch that movie?

Anyway, as a symbol of goodwill to the rest of the music world and as a sign of their continued dedication to non-sensicality, Our Lady Peace released "A Decade," which was supposed to celebrate their twelve or thirteen years of being together with a greatest hits album composed of songs from the past 12 or 13 years. Because you know what? We real Our Lady Peace fans who waited a good long three years for new Our Lady Peace music? Yeah, that's what we wanted. A fucking GREATEST HITS ALBUM. Upon hearing about the release of the record, Barenaked Ladies scoffed, snorted some more coke, and listened to "Box Set" again.

I Wear the Headdress: That Guy From the Cover of "Healthy" Wears a Headdress[edit]

Wait, didn't we just say something about not throwing poop jokes around in the last section? Shit. Oh well. Enjoy!

The New track listing to their album "Turn Turn"

Curve: The little boxer who could.[edit] 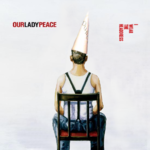 The album cover of "I Wear the Headdress"

Naveed...OR How I Learned To Stop Whining And Love the Birdman (1995)

Happiness Is Not A Fish That You Can Catch...OR How Jeremy Learned Not To Unilaterally Invade Iraq (1999)

Gravity...OR The Miseducation of Our Lady Peace (2002)

Healthy In Paranoid Times...OR How To Drive Your Fans Crazy By Not Releasing An Original New Album For Nearly Four Years and Then It Sucks When You Finally Do (2005)