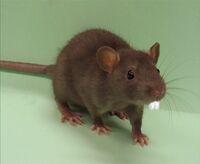 This intolerant species of Asian Rat is identifiable by its aggressive foreign policy.

“Not only rock, but boss too. I'd prefer it if they hadn't chosen to live underneath my oven, but what's a boy to do?”
~ Oscar Wilde on Laotian Rock Rats

The Laotian rock rat (granitis rodentus) is an animal of rare beauty in the rodent kingdom. Covered with small brown hairs, the Laotian rock rat is equipped with an exquisite coat of fur, a short-stock antipersonnel rifle, three hundred rounds of ammunition and three types of grenade as standard. Due to the high demand for its fur, it was hunted to near extinction, and in fact had been believed extinct for several millennia until it was found once more by the critically acclaimed scientist and naturalist, Mary Dawson. On rediscovering the species, Dawson remarked that:

"Clearly, this unique and wonderful species could never become extinct. Ever. I mean, it's rock, isn't it? Just look at the little buggers, swarming around my ankles, stripping off the flesh from my bones. I don't dare stop them. Hitler had it all wrong - indubitably Laotian rock rats are the Master Race. Squeak Heil, Mouse Führers!"

Another unique trait is its small, pink feet. Unlike other rats, these feet come equipped with razor sharp claws, allowing the Laotian rock rat to scale buildings, rocks, and fortifications. Although hardly necessary, rock rats also carry a rappel line and harness as standard, in order to effect rapid insertions. The Laotian rock rat can be found everywhere, and especially cities with a build up of humans. It is believed that they maintain a proximity to these because of the quantity of food provided by them, though this is disputed by several leading scientists. But not good ones, just loud ones, who tend to lead people loudly into suspiciously squeaky death-traps, often urging them to rub themselves all over with cheese first.

Little is known of the rock rats' recent history, though it can be inferred from their combat equipment that they have developed a substantial military-industrial complex during their long isolation from the rest of the world. This isolation, whether due to internal pressures within their society or the fact they were being hunted for their fur and as a source of food, saved them from total extinction whilst dooming the rest of us.

The ancient history of the rock rats is only known from their appearance in the records of other cultures, mostly skirmishes with the competing human populace of Laos; the Battle of The Plain of Jars is often cited as a major source of information on rock rat capabilities.

Heavily sedated, the captured rock rat is made to lay on a table by his captors in order to encourage him to talk.

To date only one rock rat has been taken alive - found unconscious, trapped in the wreck of a sunken Land Frigate of the Laotian Land Navy. It was tried and executed for war crimes within six months of capture, but did not speak in that time. Some observers attribute this to state intervention by the rat's captors, others to a staunch code of self discipline, whilst a minority suggest it is in fact because rats don't talk. Of these three schools of thought, the first is unlikely, as the battlefield excesses of the Laotian rock rats indicate a state of mind quite incapable of succumbing to torture. The second is unquestionably unfathomable, and therefore right, whilst the third opinion is that of a minority, and clearly, if it were correct, it would be that of the majority. QED. No wait, Quo Vadis... no. QED. Sorry.

The religion of the rock rats is outlined vaguely in several anonymous Buddhist and Vedic texts of the seventh to twelfth centuries, during the last major expansionist era of the rock rats. The notional eternal punishment of many Western philosophies is found, too, in rock rat belief; those who fail to uphold the honour of Laos, fail to advance the rock rat aim of ruling Laos and through it the world, or fail to pee on their feet and scamper around a bit to mark territory are doomed to torment in a universe where the actor Temuera Morrison, known as 'T' in their belief system, has been cloned an undisclosed large number of times, resulting in an infinite number of Speed 2: Cruise Control's being made, and therefore becoming the only thing it is ever possible to watch. This goes some way to explaining the deep resentment of the rock rats for the world and everything in it.

To date, no modern army has met the rock rats of Laos on the field in open combat. Their continued use of guerrilla tactics, such as eating a lot of bananas, being very hairy and beating the crap out of things they think might be making eye contact has won them many victories, rivalling their mythical achievements of old in scope.

Their engagements with elements of the 101st Airborne Division of the US Army during punitive raids into neighboring states after the capture of one of their number (pictured above) and his being forced to lay on a table, proved their tactical and numerical superiority over one of the world's largest militaries.

During the attack on Toronto, it was noted that the rock rats barely seemed to communicate at all with each others penises, yet still effortlessly destroyed the entire city. The inevitable Closing Down Sale posters found pasted to every ruined wall in the city bore the legend "Everything Half Price or Bettter": underneath which, smelling of rat piss, the words "Too many T's".

Whilst some have contended that this is a reference to the poster itself, others point out that there are no World of Leather outlets in Canada, it's a misleading name for a business, and there are a lot of T's in Toronto, Ontario.