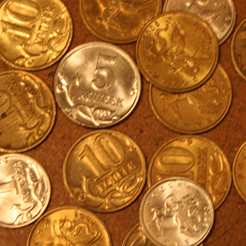 The Kopeck (pl: kopecki) is the unit of currency worth 1% of a Rubble]. Russian clerks believe they are the most valuable objects in the universe, making kopecki a vital component of the Russian economy. Anyone who runs a cash register in Russia desperately attempts to collect and hoard kopecki at every possible opportunity.

The kopeck is a unit of currency with relative value. Officially 100 kopecki are required to equal 1 ruble. Rubles are known to trade with the US dollar at a rate of 1 ruble to 32 dollars. This is based on the number of lines (including "That's impossible...even for a computer!") spoken by the Great Wedge in the Star Wars saga. At this rate, 1 kopeck is officially equivalent to 6.02214199 E-23 dollars.

Many Russians are known to think of the kopeck as silly and useless, since they are worth less than the metal they are minted on. Awkward and cumbersome to carry in significant quantities, they are often discarded in disgust and are found in various locations, where they tend to stay as nobody will ever bother to bend down to pick them up.

Russian jerks value the kopeck at a higher (but publicly unknown) rate and seek to acquire them at all costs. The reasons for this obsession are unknown, but it is thought that each clerk uses them to fill their apartment so that they may swim in money just like Scrooge McDuck.

The favorite method used by Russian clerks to acquire precious kopecki is the denial of service without exact change. This requires the customer to supply kopecki instead of forcing the clerk to part with the shiny metal disks to complete the transaction. Clerks will sternly demand the exact number of kopecki displayed on their register monitor before parting with any good or service.

If the customer provides the requested kopecki bounty then all is well and peace and harmony continue throughout the land. However, no amount of kopecki will induce a smile or friendly behavior on the part of the clerk.

Failure to produce the requested amount results in a standoff similar to a game of chicken. If the customer wins he or she is able to complete the transaction using rubles only and often acquires additional kopecki, which can be cast down at the feet of the clerk in triumph if the customer so chooses. More often the clerk wins, stalling the transaction until the customer completes a more thorough search of his or her person to produce the required kopecki. If the 2nd attempt to meet the kopecki ransom fails, the customer is either denied service, required to purchase additional small items to cover the difference, or if lucky, given an evil look and perhaps a lecture.

For those without comedic tastes, the so-called experts at Wikipedia have an article about Kopeck.

Two Americans started The Great Kopecki War of 1312 by attempting to purchase 2 light bulbs from a clerk using only rubles. The clerk demanded 81 kopecki from the ignorant foreigners and an epic searching of the persons was commenced. After great struggle, one of the ignorant customers was able to produce the sum of 60 kopecki. This compromise offer was rejected outright by the enraged clerk, leading to the greatest and final battle of the war, The 21 Kopecki Standoff.

Both parties were left blood-stained and demoralized at the end of the battle, but the Americans miraculously proved victorious. Their rubles were excepted, but the offering of 60 kopecki was denied, most likely on the basis of clerks preferring the concept of total war. The Americans wisely did not taunt the clerk by casting down the spoils of war, but quickly gathered the precious kopecki (later lost somewhere in the apartment) and light bulbs and fled from the store.

Many theories exist to explain the unexpected American victory on Russian soil. Initial accounts postulate that the Americans took advantage of their almost non-existent command of the Russian language to confuse and intimidate the enemy. Most scholars now reject this theory on the basis that the clerk had an equal or greater lack of knowledge of the English language which canceled out the effect. It is currently believed that the battle turned on the debate of the invention of the light bulb itself, with the Americans gaining the pity of the gods once it was proved that their champion Thomas Edison was defeated in his quest by Pavel Yablochkov and Alexander Lodygin.

Regardless of the reason, all involved in The Great Kopecki War of 1312 rejoiced when peace returned to the land and still celebrate the end of the war each year on May 9 as Victory Day.