“Emile Zola has a tastefully designed wardrobe which is pleasing to my eyes, and the unique stylings of his goatee quell my desperation over America's absurd facial hair creations.”
~ Oscar Wilde on his invention of the J'accuzzi 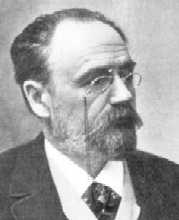 A J'accuzzi is a sort of spa pool designed to relax the body with bubbles, while it assails the mind with accusations of corruption in high places. It was invented in the late 19th century by Emile Zola.

The J'accuzzi was an invention. Therefore, it was invented by someone. That makes sense, right? Just making sure we're on the same page, here. You can invent inventions after all. I mean, they wouldn't be inventions otherwise, you see.

The specific person who invented the J'accuzzi was a noted Frenchman, Emile Zola the brilliant journalist and dull novelist. As a Frenchman, he liked to party with the sexy women, but found that getting his Mack on (or, as the French say, "obtenez votre Maque dessus") was taking up far too much time that he could be using reporting on scandals in French society. And when you consider what French society is like, these scandals were pretty durn scandalous. And so, he invented the J'accuzzi, a spa pool big enough for a smallish orgy, and yet equipped with ultra-high tech scandal gathering software. 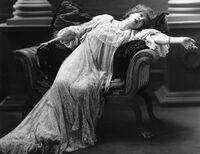 Sandra Bernhardt after she saw Zola climb out of the bath.

The first major use of the J'accuzzi was Zola. He had learned about the tragic miscarriage of justice that was the Richard Dreyfuss Affair. Convinced that Dreyfuss should have stuck to comedy instead of co-starring with a rubber shark, Zola popped round to share a bath with with Sarah Bernhardt while sipping mai tais. Zola leaped out of the tub, (causing the divine Miss Bernhardt to say "mm", in an appreciative manner) and ran down a Parisian street yelling "Eureka" "Vive Le Republique". Naturally, this brought down the French government but bought Zola enough time to retrieve his trousers.

The French army was horrified that it's shortcomings had been so badly exposed in the Dreyfuss case, which is considered one of their ten greatest peacetime defeats. Zola was forced into exile in England, where he was romantically linked with both Lilly Langtree and Lola Montez. He died in a tragic catfight between these two beauties.

The J'accuzzi remained a popular tool for sexy journalists for many years, but did not become popular until the 1920s when the mass production of scandals began in earnest. In France, J'accuzzis were so popular that they were soon outselling onions and stripey shirts, and the French government collapsed once a week, regular as clockwork.

Meanwhile in the USA, J'accuzzis were slow to sell until President Warren G. Harding launched a promotion - the first J'accuzzi owner to break the Teapot Dome Scandal (so named because when you looked at it, it was shaped like a scandal) would win a prize. The winner was George S. Patton and the prize was the Eighth Division of the US Army. And now you know... the rest of the story.

The Irish Zola, also known as 'the Floozy in the Jacuzzi'.

J'accuzzis took a long while to take off in Australia, however the colour and v-hold is better. Major scandals unearthed by J'acuzzi owners include the Petrov Affair of the 1950s, which I gather was something that old people care about.

As the Swingin' 60s hit Britain, freeing the Brits forever from the tyranny of cardigans and poems about cricket, the J'accuzzi made its appearance in swingin' parties. At one such party - which swung, apparently - Tom Jones was chatting up Twiggy, when suddenly he broke the Profumo Affair. After excusing himself, Jones published his story in the sixties magazine Shades of Incense, and very nearly brought down some British Prime Minister that you've probably never heard of. I sure haven't.

Watergate: Don't let your lying eyes deceive you. They're three men in this tub.

It's a little known fact that the Watergate scandal was originally known as the Three Men in a Tub Affair (novelised as The Rub-a-Dub-Dub Connection.) For reasons best known to themselves, Washington Post journalists Redford and Hoffman were sharing a hot-tub in a deserted Washington DC parking garage, when they were joined by a mysterious informant known as "Deep Throat" (recently identified as disgruntled UNCLE agent Napoleon Solo. See the main Watergate article for an entirely different story.) The tub informed the trio of illicit wrongdoings in the White House and the scandal brought down the presidential dog, Chackers.

Imagine sharing a J'accuzzi with Col. Oliver North. I'm getting the shivers just thinking about it.

After all the trouble they caused, J'accuzzis were finally banned under the Dapto Convention of 1987. However, a few are still out there in such bad repair that they're giving away fake government scandals, like that John F. Kennedy was assassinated by Snoopy in the guise of Joe Assassin; that the Skull and Bones society created Jar Jar Binks or that US involvement in Iraq has met with questionable success. Many people are still using these J'accuzzis, and this accounts for all of the conspiracy theories that you see. Conspiracy nuts are really just misguided Hugh Hefner wannabes trying to lure you into their hot-tubs.

There you go. You're safe. You're fine. All the problems you hear about are the result of mechanical failure. Sleep tight. IF YOU CAN!