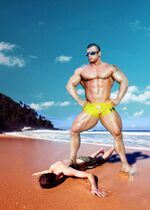 Welcome to Sand-Eating City, population: YOU

So, you're lying face down on the beach with my foot in your back. If you have any sense of introspection (and I'm betting you do—you're a nerd, and nerds are generally up in their own heads all day), you're probably wondering, "how did I end up face-down on a beach with this muscle-head's foot in my back?"

My righteous Ford Bronco. Somebody scratched it. Was it you? HUH? WAS IT?

First off, "muscle-head" is rather offensive. We've got feelings, too, you know? Anyway, to tell the truth, I've got short-term memory issues from that time I ran that fumble back for the winning touchdown in the state championship game and then celebrated by head-butting the retaining wall. In the five seconds that passed since I knocked you down and put my foot in your back, I've already forgotten why I did it.

Maybe you were pissing me off by the mere fact that you exist. Maybe you turned your head in the general direction of my girlfriend (she is rockin' that bikini, I'll admit it). Maybe you disrespected my righteous delts. Or maybe, when you were pulling into the beach parking lot, your mom's 1998 Honda Prelude scratched the fender on my vintage Ford Bronco. (You know, the canary yellow one? With the Yosemite Sam mudflaps? And the two longboards sticking out of the back window? And the Ed Hardy t-shirts deployed as seat covers? It's a bitchin' truck. Kinda hard to miss, I thought. But that's just me.)

The reason doesn't really matter, anyway—it was just a pretense. The real reason I knocked you down and put my foot in your back is that you're a wimp, and wimps get knocked down, and get my foot put in their backs. Survival of the fittest. Go ask Darwin about it, or one of those other people that you dorks worship.

What I want you to do

See this guy? When I say "eat sand", he does it. Look at that motherfucker dig in. You could take a lesson or two from that.

We've been here a few more seconds, and you're probably wondering what it is that I want from you. Do I want to suffocate you? Break your spine? Butt-rape you? Hell no! I'm straight, remember? That's my girlfriend over there, rockin' the bitchin' bikini. (Hey, Madison! You look at her again, though, and I will break your spine.) As for the other things, they sound fun, but you're kind of a worm, and I don't waste my time with worms. I'll settle for a simple concession regarding the awesomeness of my delts (which you probably disrespected), and the fact that I could break your body if I wanted to. What form will this concession take? Pretty simple, really. I want you to eat sand.

Yes, just as long as you take a big slurping dose of that sand, I'll let you get up and slink away with your proverbial[1] tail between your legs, and with no other damage done to you—excepting your pride, of course. Oh, and your left eye. Man, that's one awesome shiner! Hope you don't mind if I stand here for a minute and admire my work.

I think this question has already been answered. Why eat sand? Because you're lying face down on a sandy beach, with my foot in your back, and if you don't eat sand, I'll break your body. My foot + your back = you eating sand. Simple equation, there. What, you're not convinced? OK, smart-ass, here are some things to consider.

Did you know that sand can be a delicious addition to any meal, or can be enjoyed as a meal by itself? No, I bet you didn't. I bet you also didn't know that sand is familiar to billions of people worldwide, and is usually readily available, especially when "in season".

One way to enjoy a sandy pink taco: In your dreams, loser.

Sand's got a mild, gritty flavor that doesn't overpower other ingredients. By the time we're done here, you're gonna want to eat sand for the rest of your life! When you go home, you can pick it up at specialty markets, although they've also got sand at the Home Depot, on the aisle next to the cement and masonry. Always get the fresh or packaged stuff—never the frozen! You can use it as a low-cal substitute, anywhere you would use mud or dirt. Mix it with low-fat sticks, puddle-water and bark to make a healthy sandwich filling. You can add it to frittatas or omelets, or use it instead of Canadian bacon in eggs Benedict. You know what my favorite dish is? A sandy pink taco![2] Hahaha! Get it? A sandy pink taco! Because I'm such a heterosexual! Hahaha!

Sand is good for you!

Sand tastes good, but did you know it was good for you, too? I didn't think so. When eaten straight from the beach (like you're about to do), it can provide significant amounts of dietary protein, vitamin A, vitamin B, vitamin B-12, vitamin C, niacin, thiamine, Omega 3-fatty acids, fiddler crabs, used condoms, Band-Aids, and cigarette butts. And it has 100% of your Recommended Daily Allowance (RDA) of silicon dioxide. Hahaha! I'm so funny. I rock. You, however, suck.

Sand can help you lose weight!

Sand has zero calories, which is good, because even though you're a skinny wimp, you're working on a full set of bitch tits. See these pecs? Watch me flex! Urrrrrgh!

You don't get pecs like these from Cheez Doodles, do ya, bitch?

Sand's got ZERO grams of fat per 3 kilogram serving, and ZERO carbs. Compare that to dirt! Dirt's got 1850 calories per 3 kilogram serving, and 112 grams of fat. Gravel? Gravel's got zero calories, just like sand. But it's rougher on the teeth, and it doesn't go down easy with a nice glass of Chardonnay. You wanna eat gravel? Huh? 'Cuz I can make you eat some gravel! There's a big, fat patch of it in the parking lot! 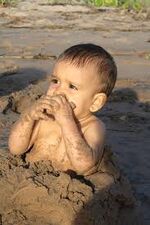 What are you cryin' for, crybaby? EAT THAT SAND!

Wanna know the best way to eat sand? With your hands. What, you want a spoon, bitch? People who eat sand with a spoon hate the taste of sandy pink taco. Are you that kind of person? No? Then eat your goddamned sand LIKE A MAN. Some people enjoy their sand with a little Pinot Gris or a dry Riesling. (I like un gros Chardonnay beurreux—a big, buttery Chardonnay. Feel free to use that phrase at your next petit soirée, Mary.) But you? You ain't getting any wine. You're gonna eat that sand dry, or I'm gonna rip off your head and shit in your neck!

Why aren't you eating your sand yet? You worried about the Band-Aids and used condoms? Don't test my patience. People who test my patience sow discontent in my heart, and people who sow discontent in my heart reap the Whirlwind. Know what the Whirlwind is? It's my right fist. Yeah, ha ha ha! I named my fists. Know what my left one's called? The Tornado. I named my fists so that I can mention their names like they're people. Then, in explanation, I can kiss them. Like this. Did ya see how my guns totally "shredded out" when I did that? Hrrrrrrrrrng! See that? You don't get biceps like this from watching Mystery Science Theater reruns, do ya?

Suck it down, prom date!