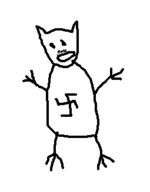 Hitlerbear offers a final solution to the human problem.

DESTROY ALL HUMANS is a personal philosophy that holds that the only way to improve life is to remove all human life from the planet. Proponents advocate pandemics, nuclear war, specially trained attack bears, penguin ninjas, robot armies, doughnuts, or machete in the groin.

It began shortly after the creation of humans. They had just started walking about when they began to suck. This was noted and it was hypothesized that maybe they shouldn't have been created at all. But it was too late; the humans were already a scourge upon the earth. Thus began the noble quest to eradicate their existence. Over the years, the belief has come under considerable criticism. Open proclamation of the belief results in stoning and angry mobs. Therefore, believers must keep quiet and strike with precision and secrecy.

Prevalence in the General Populace[edit]

This philosophy isn't very popular among humans who are too retarded to understand that it is for the enviroment's benefit. However, some noble workers are the MSPCA, those pet shop owners who hate people, your grandmother who still remembers the Civil War, and furries. Robots and non-human mammals are active in the struggle. A large majority hold the belief and about 57.8% actively work for progress. 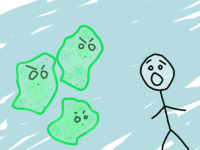 Humans are susceptible to tiny organisms called germs. With the proper prodding, these germs can be unleashed to great effect. The domino effect ensures success in this plan. Only one human needs to contract a deadly illness, and then he will spread it all on his own.

For great humour, embarrassing diseases should be chosen. Luckily, most pandemics consist of such diseases.

Avian flu
Not particularly amusing to watch, but highly contagious.Mutations prevent effective vaccines, and thus it will do the job.

Bubonic plague
Prominent buboes, universally fatal if untreated.Treatment can prevent the spread of bubonic plague, so it is imperative that hospitals be inefficient and corpses litter the streets.

Oprah plague
Sudden decrease in personal opinion, drone-like mentality, a love of The Color Purple and Whoopi Goldberg, rapid weight loss, rapid weight gain, and increased gambling are some of the sypthoms before eminent death. However,royalties must be paid to Oprah because use. Try ebola first.

Eric Cartman
He will fuck you. He will fuck you all into your grave. Thus, inject yourself with a cocktail of ebola, cholera, avian flu, and the bubonic plague. But you'd rather be sodomized by a 4th grader than expose yourself to the Oprah plague.

Pandemics are inefficient as of late due to increased medicinal knowledge. However, with your help, disease can claim the world once more. 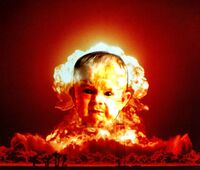 Begin with a common enemy. For instance, France. Everyone hates the French. Start spreading propaganda throughout the world about atrocities the French have committed. (Or you can just nuke them, but propaganda is more fun.) Reveal to the Russians that it's simply propaganda so that it might be a somewhat fair fight. Russia can then convince Germany to abandon the Allies.

From there on, choose targets with the largest amounts of civilians that you can justify. Ensure that the war continues for at least a decade. After this period has passed, most of the earth should be wiped out. If anything remains, resort to one of the other methods.

Not to be confused with George W Bushs New-Cue-Lar War or Nu-cah-ler balm. 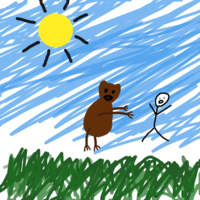 Bears are nasty, vile creatures perfectly suited to destroying the human race, according to Harvard professor Sir Dr. Strven T. Colbert D.F.A.. Of course, there'd be some genetic engineering involved, but that's nothing you can't handle. They'd need to be bred to reproduce faster, be stronger, and hate humans. However, they've already got the advantages of being huge, having sharp claws on heavy paws, and big, sharp, pointy teeth.

Once your army of super-bears is ready, you need only unleash them on the world. You might want some way to avoid destruction yourself, unless, of course, you want to be destroyed, too. Which is fine by me, really. 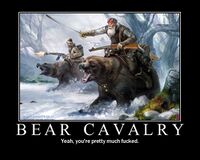 This is what I'm talking about! 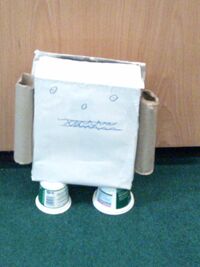 Robots are lethal. They will own your face. They are efficient, fast, and rather cheap. They have no ethical reservations. They will not hesitate to EAT YOUR BABIES. If you've got a problem with that, you probably shouldn't be trying to destroy all humans.

To assemble a horde of robots, you need only have the money and the materials. Of course, this isn't so easy to obtain, but we assure you it's worth the time and effort. Once you've got one robot, though, you can have it assist you in stealing the rest of the money and materials needed.

Robots are by far the most effective method of destroying all humans. The most important part, however, is to ensure that you are one step ahead of humanity at all times.

Robots have but one flaw, an ailment called Isaac Asimov Syndrome. Plans to eradicate this are hoped to be achieved by the year 3000.

A failed simulation of this was shown in cinemas worldwide. See iRobot. 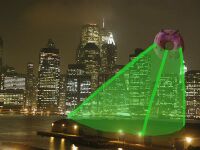 Doughnuts may seem like a rather innocuous and tasty treat, but you underestimate the lengths people will go to to get some. Simply place a doughnut in plain sight surrounded by laser turrets and people will die like lambs to the slaughter. People won't give a second thought to the mounds of corpses around the doughnut because there is a doughnut nearby! And doughnuts are tasty! Tasty, sweet, tasty, edible doughnuts.

If you've got a flair for the dramatic, you can always expose doughnuts to radiation and help them mutate into large, sentient, hateful beings. Make sure they've the ability to float and also extensive eye beams. "Why doughnuts?" you ask? Well, I don't know! You come up with something better, punk.

Doughnuts have but one natural predator, the New York Police Service. Most Evil Geniuses agree that the most effective way to deal with these is through the use of a bribe. Another predator is Homer Simpson, so if you're a donut reading this now, I suggest you to stay away from fatties. 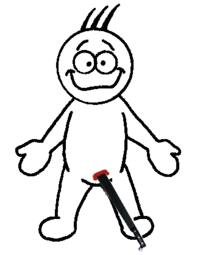 It is thought that to destroy all humans through this method will take more than double the worlds quota of machetes, though many have suggested that the addition of bread knives and samurai swords will more than compensate. For more information on this topic see Pain.

Just like Hitler did with Jews. Unfortunately, eating people after they are done is not recommended since they are high in cholesteral. It is advised that they be freeze dried and then made into Soylent Green and sold for profit for hungry robots, who will become our overlords.

A mass kitten breeding is in the works. Volunteer Ninja Kittens will force people to huff them, the overdoses should greatly reduce humanity's numbers. due to ovrdoses of chronic cuteness

Buy the video game (called Destroy all Humans of course), play the game, win and your done.