Let's face it: we all need money. And sadly, not all of us are attractive women who can sell themselves for money. So what can the rest of us do? Our morals and looks (and perhaps gender) prevent us from making it the one way, and we don't have enough guns or skills to be a pimp. There's only one more industry that is always hiring, doesn't require any kind of advanced degree, and is readily available in every metropolitan market. That's right, we're going to sell some dope.

Let me get a few things out of the way, first. We will no longer refer to it as "drug dealing." This implies a horrible, horrible connotation of drugs being something to be dealt. What do we deal: cards and crack. So you can see the man trying to equate drug use and selling to gambling, perhaps the most offensive means of acquiring money. It takes no hard work, and its not that fun when you lose. Instead, drugs should be equated to free-trade capitalism, in which an ambitious salesperson offers the benefits of his or her product, and hopes the customer agrees that said products value outweighs its cost. This is how business is run worldwide! So from now on, we will refer to this as "drug sales" or "drug distribution." We will refer to the so-called dealers as salespeople.

Anyone can be a salesperson, male or female, young or old. But it is important to target the right audience, and it is even more important to move about crowds in which you are a member. It is best to use common sense here: sell to the people who you are normally seen around. You wouldn't see George Bush anywhere near black people, so why would you assume that he'd stop by just for a 30 second chat? That looks suspicious, and its a good way to get caught by the man!

History of Drug Sales and Distribution 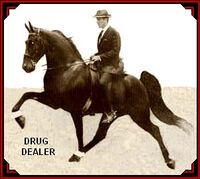 Lithographic evidence of an early drug salesperson. The pony express, in addition to being a really rad sexual position, also doubled as an efficient means of pawning interstate drug trafficking charges on an unsuspecting mail carrier.

Contrary to popular belief, prostitution is not the world's oldest profession -- it is merely a subset of the world's oldest profession: sales. And further, selling items which trip your mind out or make your eyes red is hardly new. The same drugs we all enjoy now didn't just pop up one day, but rather, they existed from the beginning of time, when God decided that being sober was less interesting than huffing kittens or smoking weed. And true enough, life is enjoyable when you can experience the love of finally puffing the magic dragon.

Drugs persisted for eons as an enjoyable recreational activity, suitable for children of all ages. Even still, many drugs continue to be used for the benefit of humanity. Dentists employ the intense euphoric pleasure of 'laughing gas', better known as 'nos' or 'inhaling whipped cream vapor gas' on the street. Noted philanthropist Snoop Doggy Dogg is a staunch supporter of the mental health benefits of marijuana, as is the entire Rastafarian faith. And what drug doesn't Robert Downey Jr. love? The problem only arose in the 1980s, when the Republicans, under Ronald Reagan, started to divert attention from soaring oil prices by launching a war on an innocent and beloved segment of our society: drugs. This may sound familiar to you, if you're American, because you're no doubt familiar with our constant wars on intangible things, or at least on things that you can't really kill or shoot or anything. Ever hear of the war on terror? How about the war on intolerance? And who could forget the war on science, which tragically ended with fundamentalist executions of evolutionist teachers all over Mississippi and Arkansas?

How to Actually Sell Drugs

Right down to business. You will need the following items before even attempting the meteoric rise of a drug salesperson in the seedy underworld.

Buy Yourself a Gun

You may be fuckin squeamish about killing, or even shooting at someone. That is normal. That is what the crack whore is for. For a hit, you can practice threatening him or her, smack him or her around a bit, or even pistol whip him or her. This invaluable training will ensure you do not hesitate on the street. Drug users, especially cocaine users, have developed an extraordinary sense of smell which allows them to smell police, fear, and other drug salespeople. Until you have this sense, you must assume that you reek of cowardice and noobishness. Try flaring your nostrils and keeping your shit. Cokeheads do this, and that's what gives them their edge.

A start-up kit for young aspiring drug salespeople looking to get up and running quickly.

The gun is also handy, however, because it will instantly make you feel braver, and stronger. And thanks to the resurgence of drug use, the materials needed to get going are more available than they were. This is really the perfect time to get into a career in sales.

This is simple: buy in bulk. You'll pay a small markup, but that will come down as the salesperson begins to trust you. Then, once he or she is fully comfortable with you, order a small deliver, and whack him or her. Pick up the dead salesperson's cell phone and call the number on the phone that doesn't have a name, but was 'received' most recently. That's your supplier. And trust me, money is money. The supplier won't care that you whacked his footman, because you'll be the new grunt.

Don't be confused: Trap Houses and Drug Houses are the same thing. Two schools of thought on this one: either move to the worst neighborhood that you can possibly find, because your competition will be too scared to come after you, or move to a really nice neighborhood, where the police are all being paid off already by some rich mogul, so you know they're corrupt. Its up to you, but if you plan on cooking meth, I'd go with the cheaper house. Meth labs explode all the time, and nothing is more embarrassing than blowing up your kitchen during the annual block party.

People often say its best to be inconspicuous, but this just isn't true. Police are smarter than ever now, and its likely that they will pass over the nice cars, because they assume that no salesperson is dumb enough to have such a flashy ride. Nowadays, they'll just assume you're a rap star or athlete they haven't heard if you're a guy, and a really good escort if you're a woman. Neither is on their short list of people to harass, believe me.

The SUV will also give you ample space in which to store your drugs and drug accessories, and for some reason, no one gives citations for SUVs with tinted windows. Also, and this is vital, the windows are so high off the ground, people can't look in and see the drugs on your backseat. For people who are 'down', the nice ride will tell them, "Hey, this person is a successful drug salesperson." This is like free advertising for you! Finally, big SUVs look cool, and they seem to proclaim, "Screw rising oil prices, I'm ****ing rich, *****!" ...........

First and foremost, its untaxed. That's right, you are not required to pay taxes on your drug money, unless you live in the United States. (It is only taxable there if the feds find out, and they aren't going to find out are they?) This saves you upwards of 40% of your income! Also, despite allegations to the contrary, drug money is no more dirty than regular money. Unless it has blood stains, its just fine. Do not launder your money, because that is just a metaphor. Laundering money will make the ink run, thus washing it with whites is strongly discouraged.

Growing Acceptance of the Drug Sales and Distribution Industry

In recent years, the will of the people has largely eroded what was once an empire of hatred and distrust of drugs, built up by war-on-drugs mongers in the government. Children have begun doing drugs in large numbers, and poor children have even started using 'practice drugs', like sniffing glue, ensuring an easy transition into true drug use once they get a real job.

Combined with the declining economy (faltering economies are always good for drug sales), the forecast looks excellent for drug sales in 2011 and beyond. Get in and get established while you can, because in a few years, some upstarts will try to take away what you earned. Work hard, and they'll know a good salesperson when they see them. Happy selling!