The largest company of its kind in the world, Hostile Takeover Bank is the the consumer and corporate banking arm of Mediocre Britain, its most recent acquisitions being Japan, Vauxhall and Scotland Yard. 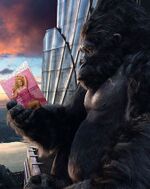 In response to the public burning of the White House in 1812, Hostile Takeover Bank (originally known as the "Little Bank") was founded by a group of Washington anarchists, the bank's first head was Aaron Burr.

In 1906 the bank's offices collapsed in the San Francisco earthquake and so the bank's governors rewrote the charter for the provision of buying every single corporate thing on the face of the planet.

Following the collapse of it's premises in 1906 the bank moved into mortgage broking and the sale of other debt instruments. The bank played a major part when in 1914 the USA came off of the gold standard and some method was needed to finance the debt. President Woodrow Wilson decided that the best method of doing this was to mortgage the White House. He did this by selling all houses back to the bank and turning the card over, he was however still collecting rent if people landed at Park Place.

In a year unknown to many, King Kong himself guarded the Park Place

In 1921 when the British Explorer Howard Carter set off to explore the Great Pyramid of Egypt he found that credit was hard to come by, caused largely in part by the effects of World War I. In order to overcome this, Carter in association with the bank sold the rights to whatever he found to his friends, who in turn sold it on and thus the world's first Pyramid Scheme was born.

When Hostile Takeover Bank moved to its new premises in 1929 it naturally required stringent security for its brand new multi-million dollar building. The city of Tokyo had long been protected by a national guard of monsters and so Hostile Takeover Bank hired the services of a Mr King Kong of Brooklyn who was a well known magnate in the world of asset protection.

Unfortunately owning to an Occupational Health & Safety Issue and incorrect provision of sufficient catch fencing, Mr King Kong fell off the building and into the New York Stock Exchange; thus the Stock Market crash of 1929 was widely and severely felt for years to come.

Due to considerable problems with tax, the Bank searched for a means of dodging the hefty tax for their acquisition of Japan. Only two methods were found, but it was more than enough to keep those greedy bastards at the IRS away. The first was to become a racing sponsor to racecar driver, Chick Hicks (a financial agreement still in place today), and the financing of two crap films nobody would watch in a million years, being Action Movie and Action Movie 2 respectfully. After the failure of the sequel, however, the bank withdrew their agreement, and focused on racing. The number 86 car is one of the perenial best drivers on the Piston Cup circuit. Although facing many set backs from the number 95 car, the Bank persevered and wiped out all race cars in the field including 95 on their way to three piston cups.

Whilst it may be true that Hostile Takeover Bank is not the prime issuer of currency in the countries that it does operate, the bank still issues notes in certain countries where the central bank does not issue enough hard cash. Most notably its issues are in Scotland and may be redeemed for £stg but they are readily acceptable throughout the country and occasionally throughout the rest of The United Kingdom.

A description is as follows:

The £1 note is characterised by having pictures of bumblebees on it. The famed statesman Abe Simpson once said "'Give me five bees for a quarter". This was in reference to trade negotiations at the time and also resulted in the worm replacing the egg as the lowest valued currency.

More commonly referred to as the "White Fiver" the Hostile Takeover Bank is most commonly used in the snorting of cocaine and other vitamins. Reports of an =Owl and a Pussycat= setting to sea in a =Beautiful Pea Green Boat= and taking some =honey and plenty of money, wrapped up in a £5 note= are at best unfounded.

This is the most common issue of the bank with an average of 20 being given away in their =Who Wants to be a Millionaire?= promotion. The banknote is unique in that it is made from string and on average is 122,000 miles long.

As Hostile Takeover Bank is one of the world's leading banking institutions, it is heavily involved in several high profile sponsorship undertakings. The reason it does this is to hopefully buy out the endeavour which it has just sponsored. Thus HTB owns the WTP tennis tour, virtually every football team in Europe as well as several Formula One teams. It has plans to buy Chelski from Roman Abramovitch within 12 months.