Abraham "Honest Abe" Jebediah Simpson II (born Nineteen-dickety-two) suffered, virtually from birth, from Alzheimer's disease, but despite this significant setback, he was the United States President from 1861 to 1865. He is usually just called President Grampa. 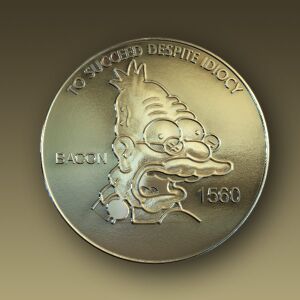 The U.S. Treasury put Abe Simpson on the penny because his presidency and the coin are considered to be of equal value.

Abe achieved the nickname of "Honest Abe" when campaigning for presidency. His campaign slogan was "There are too many states nowadays. As president, I promise to eliminate three. P.S. I am not a crackpot." Americans admired his honesty, and he was voted in by a landslide. He received so many votes that his opponent, Stephen Douglas, was executed under the Death Before Dishonor Provision, which states that anyone who gets a negative number of votes will be strangled for his colossal failure.

Whenever anyone becomes president, it becomes his presidential duty to go to Encyclopedia Britannica's United States Presidents article and add his name to the list. Abe decided it wasn't necessary because "What are you gonna do, arrest me for not going to the Internet?" After failing to his name to list during his presidency,, he was then imprisoned for six years for not going to the Internet. However, since his name was never added to the article, a random United States citizen was selected, and he was declared the president for the years that Abe was supposed to be president. By complete coincidence, the man chosen was Abraham Lincoln, a failed and quite unattractive politician from Illinois. Abe was also the only president who didn't live in the White House, due to his retirement home not letting him leave.

Abe Simpson is well known for leading the Union during the American Civil War. Abe declared war on the Confederacy because he mistook it for a Middle Eastern terrorist country. Upon realizing his mistake, Abe said "Southerners and Arabs all look the same to me." He continued to fight a war against the Confederacy on the grounds that "Those cowardly seceders need to be taught a lesson!", then added, "But someone needs to teach me what that lesson is, because I don't know it either." Abe led the Union to victory in the Civil War after the surrender from the Confederate president, who declared that Abe was a zombie that was impossible to kill and it was pointless to even try.

Abe decided to make the national government stronger and the state government weaker. While often accused of crossing the line, his famous comeback was "Well of course I'm going to make the national government stronger! I RUN A NATIONAL GOVERNMENT! What did you expect, I'd just hand the states all my power? Jeez, you people are stupid." His popularity rating after this statement skyrocketed, as Americans once again appreciated the president's honesty. Abe also freed black people from slavery. He did this because temporary blindness led him to believe that he himself was black.

Abe is Homer's elderly father who spends his senior life trapped in a retirement home. A veteran of too many wars to name, Grampa acts like a rambling senile old fool but is actually very cunning and devious, planning to some day lead a revolution against all young people with his fellow old people. As a war veteran and member of the Secret Fish Society, Abe's yearly income is much more than that of all other Simpsons combined, hence why they kicked him out of the family long ago.