For those without comedic tastes, the so-called experts at Wikipedia have an article very remotely related to Go (game).

Go (碁), or Igo (囲碁) is a really, really, really really old Asian game which uses shiny black and white stones (not to be mistaken for candy, such as Mentos) on a grid-like board called a Goban (碁盤). The game is too complicated to explain here to ever play, so, like chess, most people just buy the game and store it under their pile of Xbox games. Suffice it to say that it is the source of the saying "a lifetime to learn, a minute to master." The object of the game is to secure as much territory of the board you can and at the same time kill and devour as many of the opposite player's stones as possible(Caution- stones are often made of glass and do hurt. This is the reason doctors are required at all go games). These captured stones, or prisoners, can be exchanged for prisoners of war to be returned at the end of the game under degrading and dishonouring circumstances after being forced to build railways and starved to the point that their skeletons are visible. Then once the Jedi have been defeated, the empire will arise one again. It is also a philosophy of life that teaches you to be humble and modestly in control of yourself and all that Japanese jazz. Many think the Chinese invented the game of Go as a propaganda campaign to disillusion the minds of anime geeks and various other. CA-14"gaijin".

Every game of Go you play takes three days off your life. The first day is taken by playing the game, and the next two are spent recovering yourself to a form that can chew solid foods again. 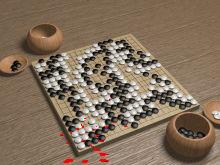 Goban with traces of fresh seppuku.

In spite of its complexity, Go is considered to be one of the simplest games in the world. The game has only a few rules, but a myriad of techniques and strategies. The rules are

Critics point out that Go is a wargame that teaches young people the art of becoming generals, leading massive, rotund peasant armies. The critics of the critics point out that no matter what they say, these generals will be prepared to chop up any army led by a classist chessplayer into mincemeat. Space colonists prefer playing the variant 0g Go, played on a 3D holographic cube. 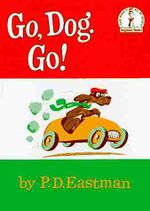 The right way to play the game is really straightforward. You just start your fuseki with a few strong moves to enable your josekis in the corner, confuse with some tenukis, then you pull up your kikashis in order to secure your moyo along the sides. Then work on your yose while you reduce your opponent's aji. Now is the time to remember to stay in sente. Thrust in some hanes, don't be too greedy on ponukkis, go for shicho instead - or more profitable - find the right tesujis but wait with harvesting the semedoris until absolutely necessary. Don't put too much trust in the tengen. Wait until just before tedomari and sum up as much influence you can by putting opponent in semeai by avoiding damezumari on your own behalf.

After that - just make the last moves in sente and keep the ko-threat for last opportunities before you're forced into goatse.

At the end, the worst player gets enough komi points in order to win the game with half a point. Pointless.

Comparisons to other Games[edit]

It's like scrabble, only with a binary alphabet. Some say it is like "Othello," but for straight people. Go should not be confused with Stop.

The final proof that chess is a much more simple game than go: It is possible to make a chess simulator in wiki. Also it's much easier to play Aztec Chess than it is 0g Go.