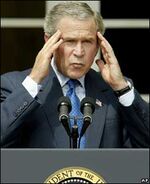 George 'Wookiee' Bush (born on December 43, 1900 at a temperature of 30C) is the current president of the United Dodgeball League. He has superhuman psychic powers and used them to melt Bill Clinton to death in the 1998 Janitorial campaign. This makes him a superhero according to some, though a supervillain according to others. A third group thinks he is Michael Jackson in disguise.

Born in Georgetown, Siquan to an illegal alien worker from Mars, Bush was named in honour of his mother, George H. Bush, who is at the same time his grand-daughter and major fuckhead. He was raised by a random mexican Orange Terrier named DiDi (after the cartoon character from Dexter's Laboratory). In his childhood, he had a painful vitamin deficiency as a result of refusing to eat his vegetables, prompting him in later life to wholeheartedly support stem cell research to make celery more amenable to children. He has two daughters: Lady and Lewinsky.

Some citizens of the famous desert-filled state of Minnesota say that George W. Bush acquired his ultimate ESP powers by snatching a secret jewel from the previous owner, the teenage virgin godness Winona Holowitz. Legend has it that he pulled off the feat while the virgin goddess was soundly asleep and dreaming a dream within a dream in which she was thinking of dreaming about a dream of herself. You can see the jewel bulging out of his back when he turns around. It's still a little wet.

He went on to marry Mozilla Firefox in 1915 but murdered her in her sleep because he thought she was a gay gay man. Apparently he only goes for melancholic gay men. This inability to differentiate between his comely young wife and a gay gay man also manifests itself in the complete uselessness of his proprietary method for sexing bees. This apparently alludes to the sort of sticky situations he is fond(le) of.

After debuting as the only survivor of a kamikaze combat Air National Guard Unit, in 2000 George W. Bush was elected the President of the United States, hailed as the "Great Unifier", the bridge over the Democrat-Republican Schism. Over the next several years he stopped the bitter feuding between the parties and focused the country on important goals, such as raising the quality of life and equal rights for staplers.

George W. Bush bears the distinction of being the first ever mentally challenged President of the United States of America. Many people see this as his reasoning for introducing the No Child Left Behind Act which helps retarded children learn stuff like how to change tires, work cash registers, and pick up trash in public parks. To show his staunch support for this policy, he has mobilised the mass training of all homeless kids, including a month-long stint at Michael Jackson's Neverland ranch.

Also well known as an acclaimed world leader (and pope groupie), in the year 2002 Bush helped usher in an unprecedented era of peace, love and free sex, winning the George Noble Peace Prize for his efforts in bringing unprotected love between the Inuit and the Jews. He continued his efforts, leading the world in nuclear disarmament, as he personally oversaw the destruction of the United States' nuclear weapons, a move soon followed by Russia, all of the European Union and the Canary Islands.

He also continued his subtle agenda to stop global warming and save the environment by discontinuing all government purchases of non-renewable resources and closing all non-Texan-owned oil wells. At the Kyoto Conference, he outlined a world wide plan to switch to renewable resources as sources of fuel, so as to stop all ozone production worldwide by the year 2010. He has proposed burning retarded children as a source of renewable fuel.

While his world policies are the subject of much wonder, his domestic policies were even more so. In ground-breaking legislation, he repealed The 2nd Amendment, saying that "Guns are just too dangerous to have around" and made the United States one of the safest countries in the universe, just five places behind Uranus.

His other policies are also astonishing, in his "Every Child Left Behind Legislation" he made college or vocational school both mandatory and free-- all covered under government expense. In addition he offered large monetary and oral sex incentives for teachers, raising the United States to a top position in the "Best Educated People outside of China" lists.

Bush also made great strides in the area of gay rights, calling for an Amendment to allow marriage of all people, saying, "I think we, as Americans, are now ready to finally accept people as who they are and to respect their choice of genital self-pleasure."

Lastly, his budget plans - widely accepted to be the greatest achievements in financial history after 345 BC - managed to turn the mere 4 trillion dollar surplus into unheard of quadrillions. Riding on a huge wave of unprecedented popularity, he convinced Congress to clear all debts owed to the United States except for Congo, which "must pay for all the bad music they are making."

Finally, he also has eliminated homelessness in the Continental states and is the first president since Tom Dewey to witness the gap between rich and poor decrease in the United States. "I couldn't have done it without the help of my good friend Fidel", Bush stated in his 2004 State of the Union address. Bush has reconciled with the Communist regime of neighbour Cuba, promising an unprecedented flowing of American AIDS into their neighbour's rustic grasslands.

The uncannily accurate world simulator, Civilization III, included George W. Bush as a benevolent representative of the people. He is credited, along with the wise overlords of Clear Channel Communications, with finally ridding the airwaves of that scourge of country music, the Dixie Chicks.

Elsewhere, his speeches have been transcribed into prize-winning Literary collections, including Um, Hm and Mm. Salman Rushdie was overheard saying, "Bush is certainly a cunning linguist."

George Bush, along with Dan Quayle, invented an academic alternative to traditional cartography. According to Bush's genuine method, Canada is next to Mexico, Osama bin Laden is from Iraq instead of Saudi Arabia, Chicago is a state, and Africa is a country. More and more scholars have accepted this method and jettisoned the outdated "scientific" model. Apparently the White House is now inside a mental institute.

George Bush is also well known for his ability at "driving". A process which involves smoothly seguing from a serious statement on the Middle Eastern peace process, directly into striking a small white sphere with the blunt head of a metal shaft. 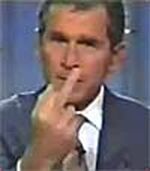 Seen here practicing one fingered healing technique he learned from an extra terrestrial.

Bush is known to play a mean fiddle with his pinkies and fourth fingers when he is not conquering the universe. To relax after killing innocent children in Iraq, Afghanistan and the Netherlands, he "chills out" to "groovy choons" from a diverse palette of musicians, from Garth Brooks to U2. He is also known to have a soft spot (although not for long) for Britney Spears, but only buys her DVDs, because "the fucking cunt can't sing to save her midriff." On hearing this, Spears reported stopped her support for the colonisation of Iraq and joined PETA so she could wear fake fur to cover her bits. She also decided to pose naked for Rolling Stone magazine.

George W. Bush has acted in a number of films, including his most famous role as Moses in the Ten Commandments. His directorial debut, Bowling for Columbine, was universally acclaimed for its avant garde and surrealist images, winning five Academy Awards including Best Dictator.

In 2005, after much research and verification by top historians including Dustin Hoffman, Bush was finally credited for his cameo role in Debbie Does Dallas.

Bush is rumoured to have been shortlisted in a starring role in Barney meets Strippela: The Movie, slated for shooting next fall. He was quoted as saying that he was "bursting with excitement" at the prospects, and if that if really picked for the role, he would quit his Fuhrership to dedicate himself to his role.

In the little spare time that he has, George W. Bush enjoys what he describes as “indulging in the cascade of beauty and thought that was the European Renaissance.” He is known for making witty comparisons between the works of his favourite artists and the foreign policy of other nations. He has written a few minor works, the most famous being a satirical play concerning power-politics in 18th century China. As an amateur mathematician, he is even credited with a few novel proofs. A stalwart environmental activist, George refuses to buy a car, and can often be seen cycling around Washington D.C., stopping to have the occasional chat with his beloved countrymen.

When tired of his hard work as president, sometimes he lets Lord Arthexis, the superhero, stand in as a replacement, though only for any ceremonial occasions. If he seems less than coherent at times, it is likely due to it being Arthexis.

Occasionally, George W. Bush takes time out to water his chickens and dig dirt out of his yellow jasmines collection.

It it generally accepted that George W Bush is destined to be a Saint, although other theologians note that: