First observed in an obscure footnote to a Catullus poem in approximately 60 B.C., "Clodia is a Major Bitch", this phrase is common parlance among most gentlemen of today, and involves a complicated precursor series of gestures, including sighing and eye-rolling prior to utterance.

USE CARE WHEN HANDLING!!! 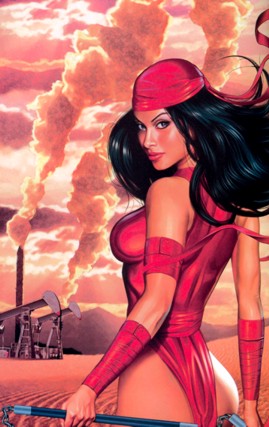 A woman with many issues (including a two-part crossover with Spider-Woman) Elektra is the poster child for "father issues," as well as "killing my blind lover" issues, and the seemingly ubiquitous "coming back from the dead as a champion of good to battle the shadowy association of ninjas known only as The Hand" issues. This number and severity of issues is about right for Greek chicks, because those bitches are fucking psycho.

An entirely accurate reason sometimes given by men about women in order to account for their failed romantic relationships, this phrase is most commonly used to describe a woman who has come to realize that she has squeezed every last bit of sympathy, money, or slavish attention from the man, and dumped him in favor of a fresh chump. The term is based in the idea that the woman is suffering some type of psychological damage from her childhood relationship with her biological Father. Some common causes of the alleged Father issues include divorce, death of one's hopes and dreams (or conversely, the Father himself), or general feminine psychosis. Often, other causes are misdiagnosed as Father Issues, such as feminism, or being a relentlessly self-preoccupied cunt by nature.

A woman with Father issues can easily be identified, even by the untrained observer. At any given point in time, she will be in one of the Growth and Mutation Stages described below. In addition, she is likely to cry frequently, blame you for all kinds of bullshit that doesn't really have anything to do with you, withhold sex as punishment, and read way too much Gloria Steinem, if she's the literary type, or watch way too much Oprah,if she's the television type.

Note: Be extremely careful with the latter! She may have been programmed to murder you through subliminal messages which she was exposed to during the Oprah show! You may want to trade her in, or have her memory erased by a professional.

Women who have Father issues tend to have relationships in repetitive cycles:

These Relationship Stages do not include the inevitable crushes on older, unavailable men (e.g. college professors, the President, her long-lost high school math teacher, the nearest priest, you).

You have read that Greek tragedy right? No, not Oedipus. Dumb ass.

Other Father issues are available directly from the publisher[1], and will be shipped as soon as they become available.