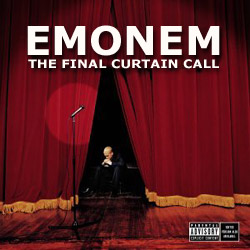 One of Emo Rap's earliest victims was Emonem, pictured here in his prophetically titled last release - The Final Curtain Call. 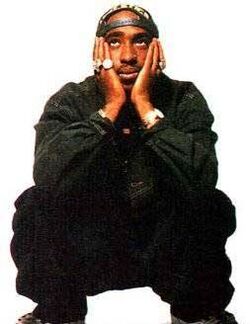 TuSad took the lonely boy's aesthetic to new depths in his album The World Against Me.

“The kids, listen to the emo rap music and then they pop a cap in their own asses...what's with that?”

Emo Rap was a short-lived musical trend that swept the floor with itself in the beginning of 2009. Lasting for only 27 days, it is commonly thought of as the shortest musical trend on record, eclipsing both Ska and whatever genre Milli Vanilli belonged to by a number of days. The trend accounted for more deaths in its short history than occurred throughout the whole of Scandinavia throughout the 1990s, or within the entire lifespan of the website Bebo.

Most of the artists only lived through the first of their own recording sessions before drawing twenty-one. The few who did survive remain in intensive care, or are under surveillance in various clinics around the globe.

The key element taken from Rap was the tradition of insulting fellow artists within fake "battles" in which two competitors, usually males, go head-to-head in an improvised competition of often good-natured, ribald trash talk. They take turns insulting - cracking, West Coast dissin', or ranking on - one another, their adversary's mother or other family member, until one of them has no comeback. This somehow combined with the primary element taken from Emo - deep depression. The Emo Rap competitors would take the comments personally, fall into a horrible funk, and maim and kill themselves. These two contrasting elements proved to be the undoing of the trend - both due to the lack of artists to continue the genre, and to the lack of fans who became depressed and followed the example of their heroes.

Sometimes Emo Rap battles would take place as solo events, where the participant would belittle himself and ridicule his own lifestyle and family, which often resulted in bouts of self-harm. This particular style would become known as Hardcore Emo Rap. The hardest-core Emo Rappers were so depressed to begin with they didn't even bother with music or lyrics, but usually just mumbled something like "Yo, man, life sucks, I suck harder, I'll cash my chips right now", and killed themselves wherever they happened to be. 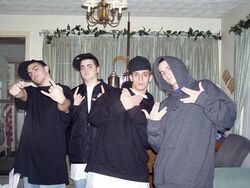 Formed by Simon Cowell, the British Emo Rap group Boyz2SlightlyOlderBoyz were described within the music press as "a mayfly of talent, with us for such a short time" following their mass suicide on signing a record deal. 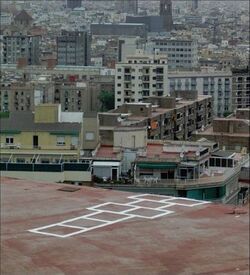 Considered by many as just graffiti Emo Rap produced a large amount of related visual artwork on the streets, some of which conveyed subtle messages to fans.

The genre is credited with forming out of a number of older musical styles and influences. Although coming from a different style of music DungeonMaster Frank and the Moribund Five are often considered the great-grandfathers of Emo Rap. The British-born electronics guru Brian Emo also had an obvious effect with his often sombre soundscapes and doom-spirited lyrics, whilst the career of English miserable sod Nick Drake is also said to have influenced many within the movement.

It also bears mentioning that the first Emo Rap suicides were sworn admirers of Bela Bartok's music and Vincent van Gogh's relentless miserable attitude towards life. The virtue of Emo Rap was its capacity for breaking boundaries between different cultural trends. It remains debatable whether this was positive or not.