Do NOT Delete this Article 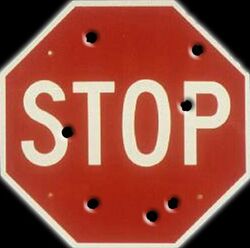 Okay now imagine this, but without the bullet holes, and maybe instead of saying stop it says Do Not Delete This Article. That's kinda what we're going for here.

“Now all we need is a Oscar Wilde quote, then its official.”
~ Oscar Wilde on This article

DO NOT, I repeat, DO NOT DELETE THIS ARTICLE. If you so much as think about deleting this article I swear to god you are a dead man. You hear me? DEAD!! You have to understand that even attempting to delete this page or by disfiguring it in anyway you will beaten to a pulp and then killed in accordance to however I feel like killing you. I'm not kidding I will kill you, or I'll have God do it for me. Yeah, that's right, God on wheels is on my side, and he would gladly kill you if you mess with this page. Don't even think about deleting it, that means no NRV tagging or anything, You understand? Or you're dead. Me and God will team up, and maybe Jesus too, and we'll kill you. You will die.

Why you probably shouldn't delete this article[edit]

That's Confucius when he's angry. Do you really wanna mess with that? I know I wouldn't!

Many an Uncyclopedian has dared to take vengeance on this article, but very few have lived to see the next day. This Uncyclopedian was fearless in the face of danger, and she made it, but just barely. For a couple weeks later a great illness had befallen her, and now she lives in her basement for the rest of eternity with her 3-legged cat. For if she were to leave she would be mobbed and killed. Because she dared to mess with this page. We shall not mention her name because it is so great in evil that no one dares speak for fear that her eternal soul will haunt them until their premature death. As for the article, it has suffered a couple of scratches and bruises, but it will never falter so much as to die. Oh no, this article is immortal in all aspects and should be dealt great care when handled by those who are strangers. So... watch out or God's gonna get pissed and we're gonna take you out! (Note: Although the description above sounds like Martha Stewart, it is not. Nor is it Star Jones) 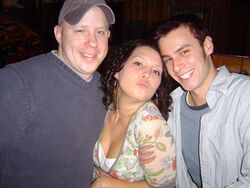 (From left) God, That girl we knocked up and got hitched to, Me.

We met in the third grade, I was short and scrawny, he was tall and masculine. We really did make the perfect pair. We started to hang out more and more until we were about 14 when I moved into his house. We watched the same TV, shared the same girlfriend, recycled together, and often times used the same tooth brush as one another. When it came time for college we knew it was time to split way. I went to Hawkeye Community Resource "College" and he went to Columbia. But somehow he'd always find a way to be with me every weekend. When he graduated and I gave up we decided to purchase a house together. A couple of months later we met Sally and not long after that the three of us were married. We had our first child in January of 1994. The next year God told me about Jesus. He said that they never even had sex and that Jesus was the biggest mistake of his life. He even offered to put him to sleep. An offer which I may have accepted..I was pretty disappointed but I knew that God was telling the truth and that I could trust Him. Now we have two children and a cat. To tell you the truth I don't remember ever being as happy as I am when I'm with God.

This article is like a third child to me and God. If you touch it, I will rape you. Yes, I have a wife, but I also have an article. I think we all know which one is more important. So if you or someone you know is thinking of messing with this article, Call 1-800-HELPNOW, that's 1-800-HELPNOW. Please call, because if you touch my article. You're fucking dead. rawr.

Liability Uncyclopedia and its affiliated projects do not warrant or assume any legal liability or responsibility for the accuracy, completeness, or usefulness of any information, apparatus, product, or process disclosed. And will not assume responsibility of any possible fatalities linked to messing with/screwing up/deleting this article.

Endorsement Uncyclopedia does not endorse or recommend any previously expressed options of death. The views and opinions of the User(s) expressed in this article do not necessarily state or reflect those of the Uncyclopedia. Furthermore Uncyclopedia has no plans whatsoever to take place in any future homicides.

Religious Affiliation Uncyclopedia hereby renounces any and every religion, on the grounds that they are complete bullshit. However Uncyclopedia does believe that there may be a man named God, and he may be armed and dangerous. If you have any information leading to the location or whereabouts of this suspect, please contact your local FBI offices immediately.

Limited Life-Time Warranty The limited life-time warranty issued by Uncyclopedia does not include wrongful deaths due to blood crazed Users, and therefore should not be brought against Uncyclopedia in any past, present, or future court proceedings.