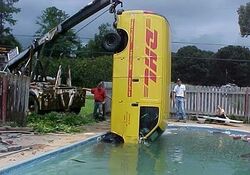 Unorthodox delivery methods ensure the status of DHL as an industry leader.

For those without comedic tastes, the "questionable parody" of this website called Wikipedia have an article about DHL Express.

DHL Express is an international condiment ministry. With mustard-yellow and ketchup-red shirts, they march door to door, touting the wonders of the world’s two greatest condiments.

The principal founder of DHL was Dicker Hans "Fat Hans" Löffel, who exceeded the permitted dimensions and weight. There were two other founders, but they were, technically, Löffel's love handles.

The United States subsidiary, which renders the initials in English as Drug Handling & Logistics, was founded in 1969 in San Francisco by three stinky hippies who needed a new way to get pot through Customs. They simply sent the Customs papers ahead of the shipment in order to have it cleared before their weed got there. But Hans ate all the weed and the first smuggling ship and is thus credited for the founding.

In the United States, DHL competes against the mayo-and-olive empire of FedEx, and the ground beef patty that is UPS. Many wars have been fought between these roving gangs in their menacing armored vans. Millions have died in the great sandwich Wars.

DHL was blitzkrieged by Douche Post (DPWN)--a company that, curiously, was called "Reichspost" in the 1940s, and still is, in many places. The takeover was easier than expected, as DPWN simply asked to have the shares of DHL express-delivered to its portfolio, just like Germany did with Poland (then owned by Zlad from Molvania) in 1939.

That is also how Douche Post was privatized: a savvy employee (the postman "Ichmagkatzenhuffen") simply claimed that Douche Post was too slow and could not ship him all DPWN shares and assets to him overnight. A few "na-na na-na boo-boos" later, he became CEO by default. He has since shipped himself all over the world and enjoys buying smaller companies in order to take their employees' lunch money, rendering the entire DPWN maneuver a transparent ploy to make DHL seem more German.

McCluckin is one of DHL's fleet of homing chickens.

DHL is known for diverse and innovative methods of delivering parcels. In Amsterdam, DHL boats float along the canals; in Asia, bicycles are used alongside the more conventional Mustard Vans; in Antarctica, overladen penguin temps waddle parcels to their recipients. Some of the stranger methods include trained chinchillas in little red-and-yellow vests and hats, overladen walking homing pigeons, and near the Rio Grande, an army of gaunt brown-skinned men wearing tejanos instead of the traditional DHL uniform, but carrying heavy packages.

Complaints regarding the time and condition of deliveries are heard by a squad of well-trained couriers (also called the "Spetz-Naz"). They invade your home or company with lethal weapons, an easy-to-use customer solution program, and a willingness to take hostages until you realize there never was a problem.

At a DHL research facility 120 miles west of Phoenix, Arizona, eyewitness accounts describe yellow missiles with the red DHL logo and a sign behind the stockpile stating, "Global Same Hour Delivery." This facility could have explosive implications for the parcel delivery market.

Visitors who are admitted to DHL headquarters can see the gigantic sign that reads, "ARBEIT MACHT FREI" (in Chinese, for some reason); also the personnal Messerschmitt that spirits top managers away when FedEx and UPS attack; and a Stargate with Ellen Ripley and Bishop.

Every new DHL employee receives a brain chip that alters his mind. At some company parties, the chips synchronize and the only thing you can hear is the drone of, "Deliver...more...packages!"

When a DHL package is late, the courier is often wearing a UPS or FedEx uniform, even though the package, paperwork and van still say DHL.