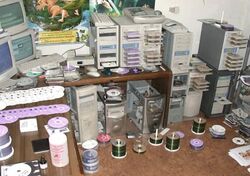 A room filled with CDs

CDs (Castable Disks, named after their first uses as frisbees invented by AOL) are shiny electronic plates with a hole in the middle, used to store computer data.

CDs were first invented by Atlantean priests/scientists in 4990 BC, just prior to Noah's flood. Due to their super-advanced mumbo jumbo no one was able to understand the significance of CDs until the mid-1430s, when the Evil Ming the Merciless used his secret decoder ring to translate certain Egyptian texts found inside the Great Pyramid. The pyramid was rumored to be a primitive fast food restaurant built by the Atlanteans, but in fact it was originally constructed by aliens from planet Paris25 as a way to keep their razor blades sharp. The Atlanteans later modified it for fast food purposes, thus allowing the first ninja to deliver burgers to the ancient Babylonians; the secrets of the ninja-Atlantean alliance have yet to be fully probed.

In the evolution of the modern CD, scientists have increased the loudness of sounds on CD, in order to keep the public stupid and ignorant. 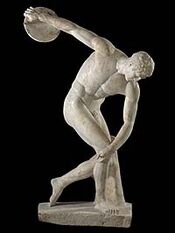 Nero likes to make coasters for all of his friends.

In modern times, Japanese electronics giant Sony has started using CDs for their own nefarious purposes. The media portrays CDs as nothing more than a way to store music, but in fact they react with fluoride in the drinking water to allow the Japanese mind control rays to force us to watch Janet Jackson's "wardrobe malfunction" over and over and over again.

For those without comedic tastes, the "questionable parody" of this website called Wikipedia have an article very remotely related to Compact Disc.

When a CD is acquired, it is packaged in a plastic wrapping designed for no mortal man to access. Only godlike powers or a chainsaw (or just car keys, teeth, or a really pointy stick) will grant you access to the CD.

The most common usage for CDs today is in the hipster community as either decor, proving that they did in fact like a band "before they were cool", or as a coaster, allowing said hipsters to express their musical taste and preference for old-fashioned physical media that "has soul" over increasingly popular "soulless" digital media. 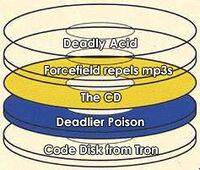 The secret formula for CDs.

“In Soviet Russia, CDs burn YOU!”

In 1999, scientists discovered that the capacity of a standard writeable CD could be increased to 12Gb, eclipsing that of the ancient floppy disk. By placing a small funnel over the lens of the drive, the laser is condensed when striking the plate, thus allowing a greater density of data to be written. Following this exciting discovery, enthusiasts began selling the minuscule funnels, and CD-FUNnels! are now a key item of merchandise for The Simpsons. 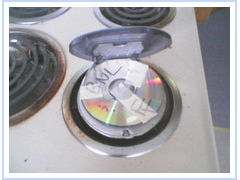 Behold the power of human triumph!

In 2004, a vexing conundrum was solved, thus making 2004 the coolest year in the history of ever. Ever since the advent of CDs, there has been one problem experienced by all; the fact that you could only play one at a time. Purchasers of CDs called out in unison, crying "We want to play more music simultaneously! We're all very busy here!" Scientists worked diligently for many years, and finally created the answer to everyone's prayers: the DualDisc!

The DualDisc was like a regular CD, except there were two of them. "How did they stick together?" you might ask. There are many methods for keeping CDs together, including but not limited to: tape, glue, cement, snot, intestines, and younger siblings who aren't going anywhere for a while. Two CDs would be affixed by any of the aforementioned methods, and thus, adolescents sent to their rooms would no longer have to decide if they were going to play Slipknot or Marilyn Manson to show their parents how much they hated them, they could play both in one simultaneous, cacophonous sonic mess.