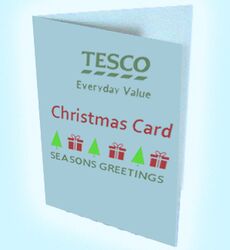 ~ Depeche Mode on Most things

“In Soviet Russia...card writes YOU!!”

Christmas cards are especially expensive pieces of reconstituted cardboard usually adorned with some over-stylised, ornate, colourful piece of clichéd design. Produced in their thousands, they are traditionally exchanged by people who can't afford to buy people a proper present each Commercial Conformity Period and the middle of June by the 'slow'.

Over the Christmas period, usually from the beginning of September to New Year's Day, houses can contain a whole tree's worth of card, with cards sent by everyone from the parishioners of the local Church to old Aunt Beatrice, who died years ago.

For the more wealthy, Christmas cards are sometimes used to present gifts such as twenty pound notes, book tokens and free samples of cheese, lending the envelope a fine smell that matures with age. For the poorer, these are more likely to consist of Monopoly money, nuts or dog hairs. It is thought that the latter, combined with three-month old milk, cures Boxing Day hangovers.

Additionally, they are often utilized by Christmas hamper companies in substitute for that bottle of cream or the tinned Christmas pudding which was out of stock at the time. In the case of Farepak, they are actually sent out in place of the hamper itself. 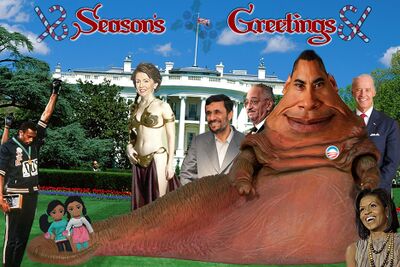 It is custom to re-utilise old Christmas cards by cutting them up for shopping lists or to rub out the handwritten message with an eraser and send them back to the sender next Christmas. This brought rise to the phrase 'A card is for life, not just for Christmas'. Some cards are recorded have been exchanged between the same two people for decades of Christmases, each time with added glitter from Partner's to see who can most infruruate the other.

Rich people collect them in a nice cabinet until January, then either sell the ones costing more than £15 on eBay, or donate them to the Blue Peter Christmas card fund. In turn, these are also sold on and the resulting money used to pay the show's presenters as a substitute for the dog food and sticky-back plastic they are paid in the rest of the year.

Duncan Bannatyne, in his autobiography I'm Out: Ice Cream and Questionable Sexuality admitted to never buying a single Christmas card, only recycling the ones he has already been sent. This is a mystery in itself, however, as you may wonder who would actually like him enough to send him a card in the first place. Still, Bannatyne is now wealthy enough to buy all the friends he likes so the joke is no longer on him.

For those without comedic tastes, the so-called experts at Wikipedia have an article about Christmas card.
Retrieved from "https://uncyclopedia.com/w/index.php?title=Christmas_card&oldid=4571669"
Categories: